Average temperatures above normal in February. Average temperatures were above normal in all areas during February (Table 1). Although departures from normal were small at Pensacola (0.1° F), Key West (0.7° F), and Tallahassee (0.8° F), Orlando was 3.5° F above normal. Several daily maximum records were tied or broken during February (Table 2). At Melbourne, daily maxima of 87° F on the 5th and 85° F on the 25th, tied a record in existence since 1943 and broke a record in existence since 1958, respectively. 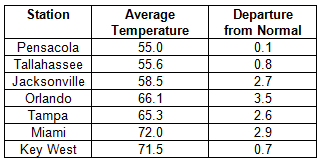 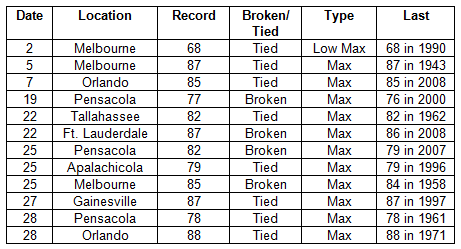 Rainfall totals generally below normal in February. Rainfall totals for February were below normal in most areas (Table 3). Rainfall totals in central and southern areas were generally below one inch. Key West recorded only 0.01 inch during the month. The monthly total at Jacksonville (4.06 in) was pushed above normal by two record daily amounts on the 8th and 10th (Table 4). A band of above normal monthly rainfall extended from the Gulf coast near Cross City northeastward to the Atlantic coast near Jacksonville (Figure 1). 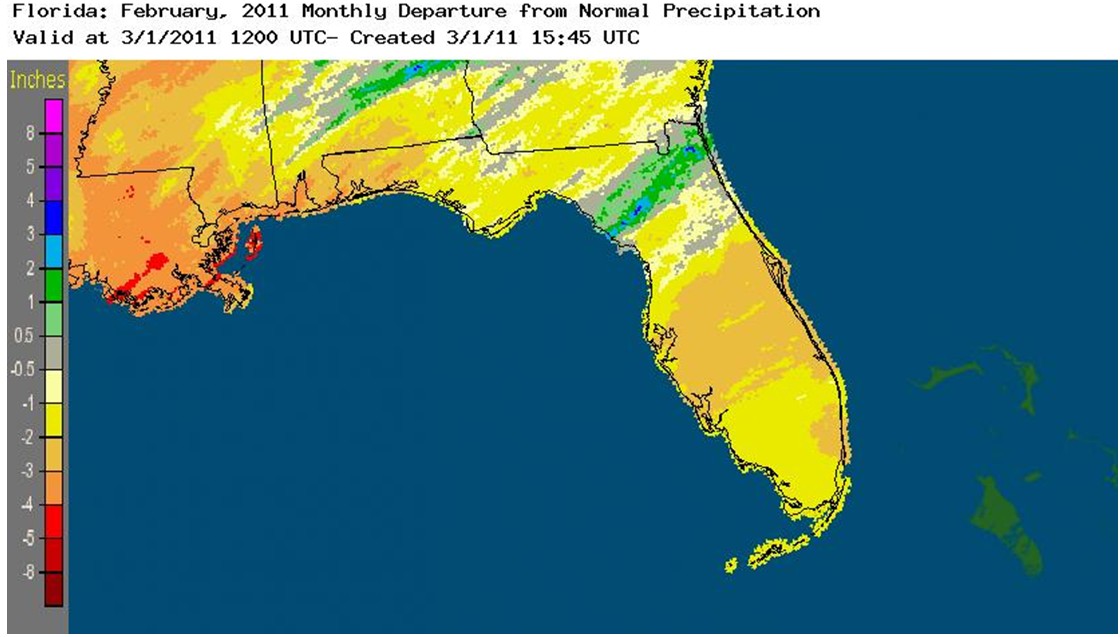 Hazardous weather. Three-quarter-inch-diameter hail was observed near Newberry on the 2nd. Numerous severe weather events occurred on the 7th. Funnel clouds were reported near Bunnell and Flagler Beach. Flooding of roadways occurred in Gainesville. Thunderstorm wind gusts up to 61 mph were recorded at Sanford. Trees and power lines were downed by thunderstorm winds at New Smyrna Beach, Ocala, Crescent City and Holly Hill, and a tree was blown onto a car near Deland. Later in the month, wildfires started in Marion County on the 25th and in Putnam and St. Johns Counties on the 28th. All areas of the state remained abnormally dry during February. Extreme drought conditions existed in areas near the east coast.

Agricultural and other impacts. As freezing temperatures occurred in west-central parts of the state, producers watered fields to preserve strawberry crops. This effort, combined with continued dry weather, drew down the groundwater to the extent that several sinkholes formed. The harvest of mid-season fruit continued despite moderate to severe drought conditions in citrus regions. In the north, sparse precipitation and near-normal temperatures allowed fields to be prepared for spring planting.