February rainfall generally above normal in southern areas and near normal in northern and central areas. Rainfall totals for February well above normal at some southern stations, while totals were near normal across most of northern and central Florida (Table 2). Heaviest rainfall occurred in extreme southern areas as surface low pressure systems moved across the peninsula. Daily record amounts were recorded at Miami (2.90"), Key West (1.60") and Orlando (0.62") on the 1st. On the 5th, Apalachicola recoded a disly record amount of 2.30 inches. One inch of snow was reported at Jay and DeFuniak Springs on the 12th. A trace of snow was observed at numerous locations in northwest Florida from Pensacola eastward to Tallahassee overnight from the 11th to the 12th.

A graphical depiction of the monthly rainfall departure from normal (inches) for February is given in the figure below (courtesy of NOAA, NWS). 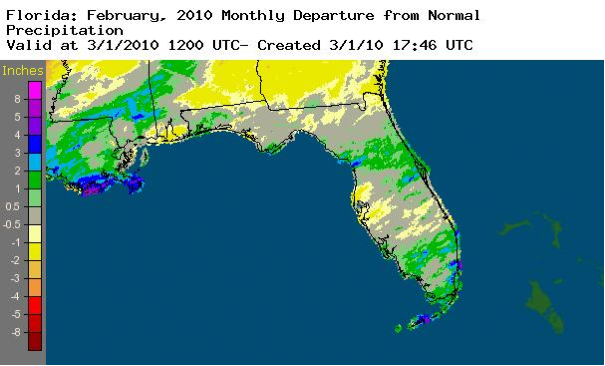 El Niño continues to impact Florida. Sea surface temperatures in the equatorial Pacific Ocean reached 1.2° C above normal, designating moderate El Niño conditions. An active storm track in the Southeast, associated with El Niño conditions, was along the Gulf coast and across the peninsula. This brought above normal rainfall to both northwestern and southern areas.

Hazardous weather. Thunderstorm winds toppled a tent at the Florida Fairgrounds near Temple Terrace on the 5th, injuring seven people. On the 12th, thunderstorm winds up to 70 miles per hour produced damage across Miami-Dade County. Later in the month, two golfers were injured by hail near Palm City on the 24th.

Agricultural and other impacts. Potato farmers near Hastings replanted crops after recent heavy rains and flooded fields caused rotting. Snow in the extreme northwest halted field work briefly. Below normal temperatures slowed development of vegetable crops in many southern areas. Drier weather later in the month allowed vegetables and watermelons to be planted around Lake Okeechobee.