Rainfall totals were varied across the state in December. Rainfall totals for the month were above normal in the Panhandle and South Florida, and below normal in the northern peninsular portion of the state  (Figure 1). Major reporting stations registered departures from normal ranging from -2.37” to +7.78” (Table 2 and Appendix 1), although localized parts of the state saw rainfall totals that were as much as 3” below normal to more than 8” above normal (Figure 1).  December 2015 was the wettest on record for Miami. There were a small number of 24-hour precipitation records broken for the month (Table 3). 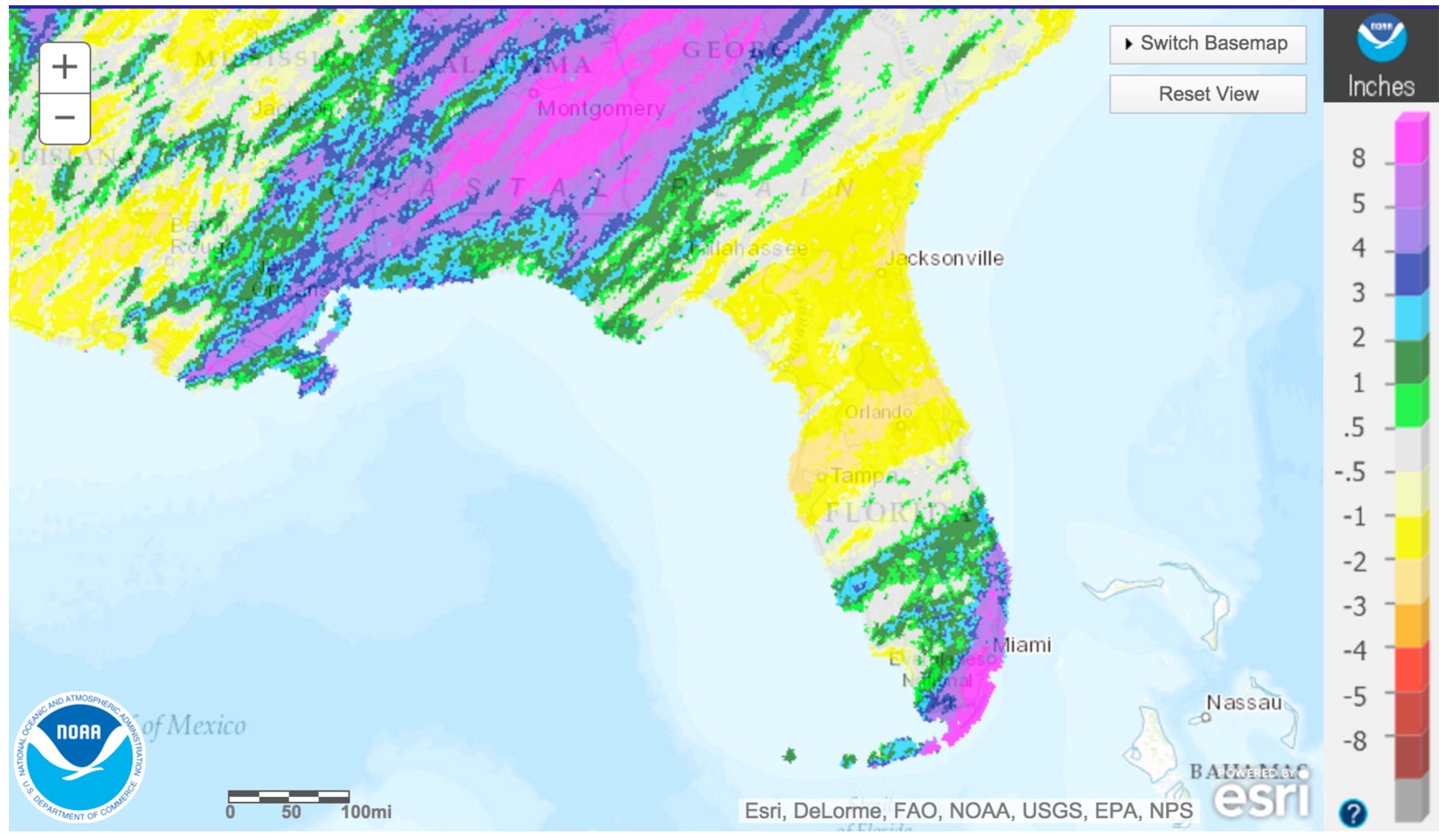 Based on current data and forecast models, the Climate Prediction Center (CPC) will keep the ENSO Alert System at an El Niño Advisory. El Niño conditions are present, and positive equatorial sea surface temperatures (SST) anomalies continue across most of the Pacific Ocean. Over the past month, sea surface temperatures have also been above average across most of the Atlantic Ocean and the Gulf of Mexico. El Niño is expected to remain strong throughout this winter, with a transition to neutral conditions anticipated during spring or early summer of 2016. The CPC is predicting a strong probability of above-normal rainfall for the entire state and a moderate probability of below-normal temperatures for the northern part of the state through March 2016

There were a total of 60 severe weather reports made in Florida during December 2015.  Most of these were related to flooding (21 reports) and storm damage (16 reports).  A cold front passage between December 4th and 5th gave rise to heavy rain and numerous flooding reports from the Miami area, with several street closures in the region. Some areas had water deep enough to stall vehicles. This weather system also brought heavy wind reports (gusts exceeding 40 mph) along the Florida Keys. Waterspouts and a funnel cloud were spotted near Flamingo Key and Key Largo on December 11. Thunderstorms along a low-pressure trough along the Panhandle brought in a series of reports of high winds and storm damage on December 22, including blown-down trees and power outages from wind and lightning. A strong cold front swept through the same area between December 28th and 30th, with wide spread storm damage reports (downed trees and power lines) in and around Pensacola, and reports of flooding on the Apalachicola River. This system also spawned a tornado in Santa Rosa County that was confirmed by radar.

Table 4: Breakdown of storm reports submitted in Florida during the month of December (Compiled from Southeast Regional Climate Center.)

At the beginning of December, topsoil levels were at mainly (79%) adequate, although some (14%) short values and a few (7%) surplus levels were reported across the state. By the end of the month, the area covered by adequate levels was slightly decreased (to 77%), and a slight increase (to 17%) of short soil moisture extent was reported.The lack of rain in the first few weeks of December allowed farmers in the Panhandle counties to continue cotton and peanut harvesting, although some cotton fields in Washington county remained too wet to harvest. By the third week, peanut harvesting completion rate was at 100%, slightly ahead of last year, and matching the five-year average. Cotton harvesting is nearing completion in Jackson and Walton counties. Sugar cane harvesting continues in Hendry, Glades, Palm Beach, Broward, and St. Lucie counties with no noted delays. Rains received on sugarcane fields are being managed with lateral canals and raised beds. The cold front in the first week of December with rain and winds battered sensitive vegetable crops. Farmers in Palm Beach County planted vegetable crops on raised beds and used lateral canal systems to help minimize damage from standing water after the rains. Bacteria soft rot on tomatoes and peppers and Rhizoctonia root rot on beans was evident due to warm and humid conditions. Miami-Dade County farmers reported 50 percent of vegetable crops in the ground were flooded, damaged, or totally lost due to heavy rainfall in the first part of December. As the month continued, warm and wet weather conditions in Charlotte, Collier, Glades, Hendry, and Lee counties lowered vegetable yields and quality. Warm conditions accelerated maturity in vegetable crops, and at the same time negatively affected yields and quality. Cattle and pasture condition ratings are mainly good – rains have kept pastures green and growing, although plant diseases are more prevalent than usual for this time of the year. Most of the citrus growing region is drought free, with only the eastern edge of Orange and Volusia County, most of Osceola County, and Brevard County experiencing abnormally dry conditions. Growers were irrigating as needed and spraying for psyllids. Mowing was being reduced to an as needed basis, mostly before harvest.

At the beginning of December, approximately 83% of the state was drought free, with the remainder of the state experiencing abnormally dry (D0) conditions, with a very small pocket of moderate drought (D1) conditions in Miami-Dade County. Rains in the first week of December eliminated the D1 conditions and shrank the D0 area to less then 8%. D0 conditions persisted throughout the month in Dixie, Osceola, Brevard, Volusia, and parts of Lafayette, Baker, Nassau, Seminole and Orange Counties. D0 conditions appeared after the second week of December in Suwannee, and parts of Columbia and Hamilton Counties, and remained in place for the remainder of the month. By the end of December, 88% of the state is drought-free, and the remaining 12% are experiencing abnormally dry conditions. The water level in Lake Okeechobee at the end of the month is about 14.76 ft., slightly up from the beginning of the month. 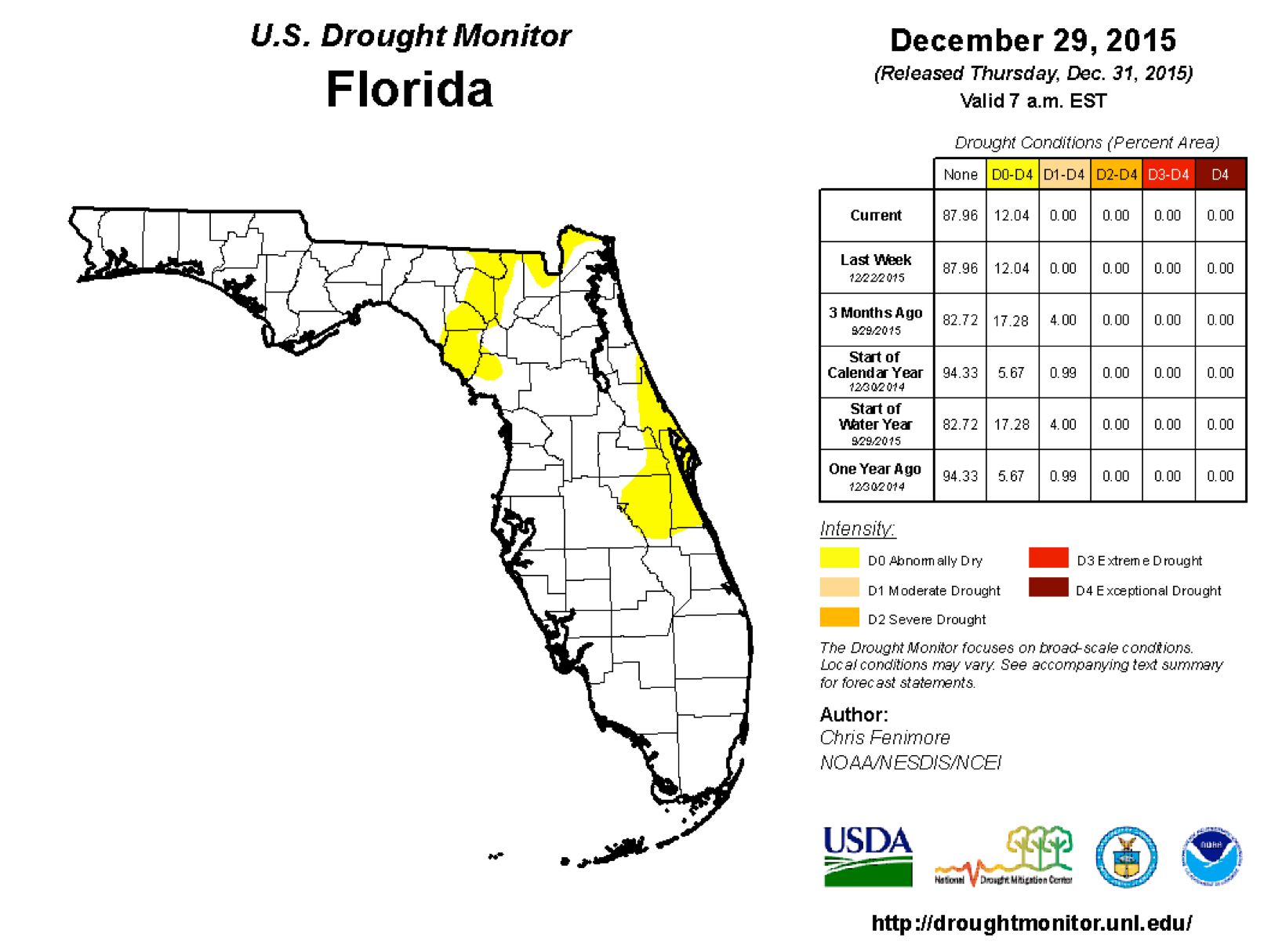 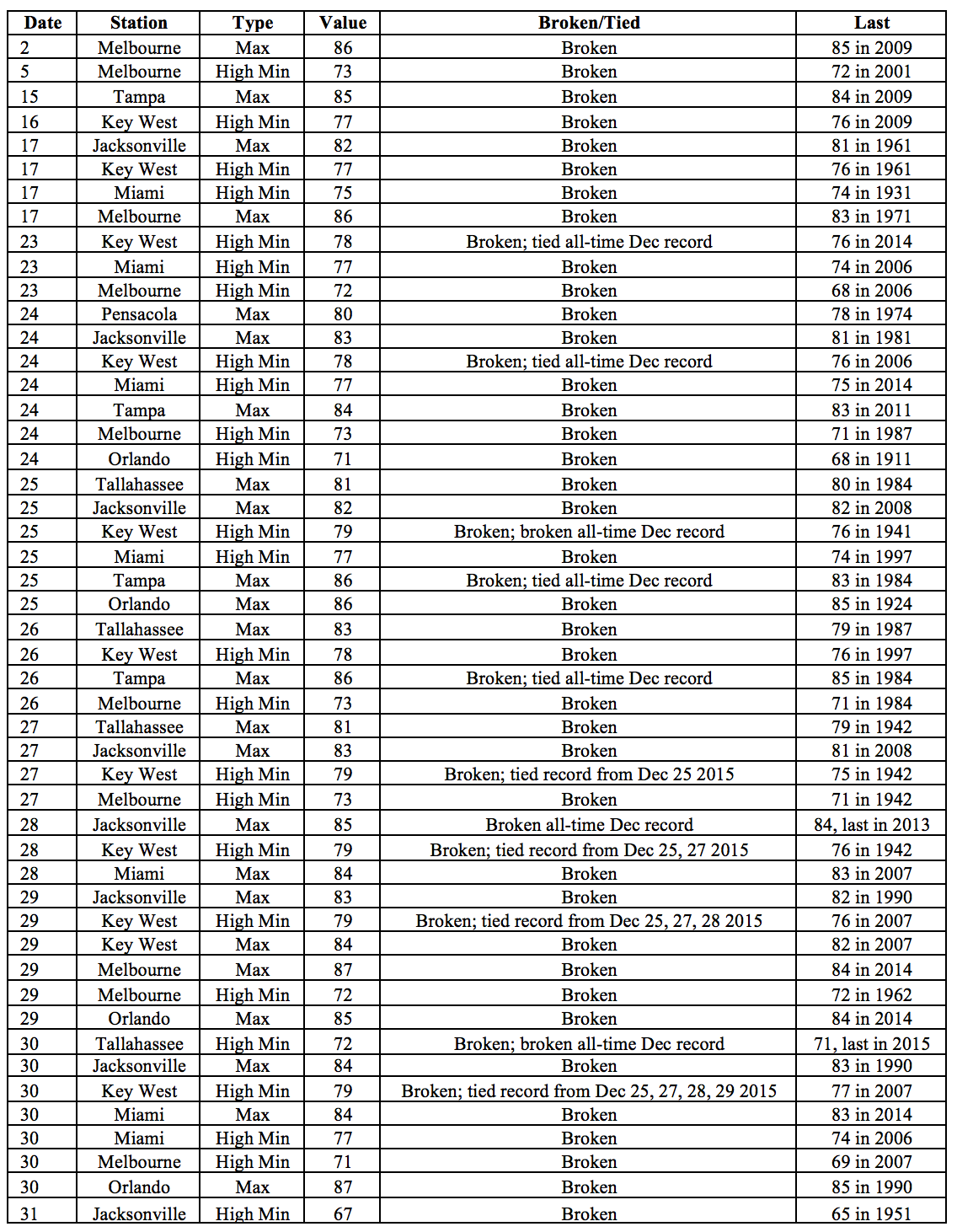