Average temperatures above normal across the state in December. December 2013 was a fairly warm month across Florida (Table 1 and Appendix 1). Departures from normal ranged from 0.6 ˚F in Pensacola to 5.8˚F in Tallahassee. Average temperatures for December 2013 were the 2nd warmest in Miami and Fort Lauderdale, 3rd warmest on record in Orlando and Daytona Beach, 5th warmest in Key West and Tampa, and 10th warmest in Tallahassee. There were a number of maximum and high minimum temperatures tied and broken during the month (Appendix 2). The all-time record high maximum temperature for December in Jacksonville was tied on the 9th with a recorded temperature of 84˚F.

Rainfall totals varied across the state in December. Portions of the Big Bend, Panhandle, north-central Florida, and areas around Miami reported monthly rainfall totals above normal, while the majority of the Peninsula saw below normal totals (Figure 1). Departures from normal roughly ranged from -2.31” to 2.63” (Table 2 and Appendix 1), though some areas of Florida saw rainfall totals that were as much as 3.00” below normal or nearly 8.00” above normal. December 2013 was the 6th wettest December on record in Miami, while it was the 6th driest in Orlando. Numerous 24-hour precipitation records were broken for the month (Table 3). 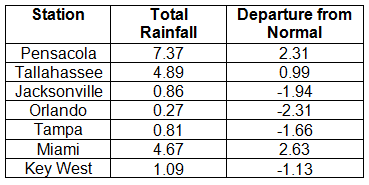 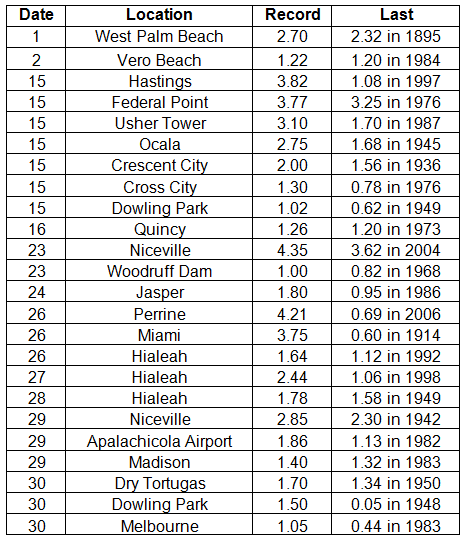 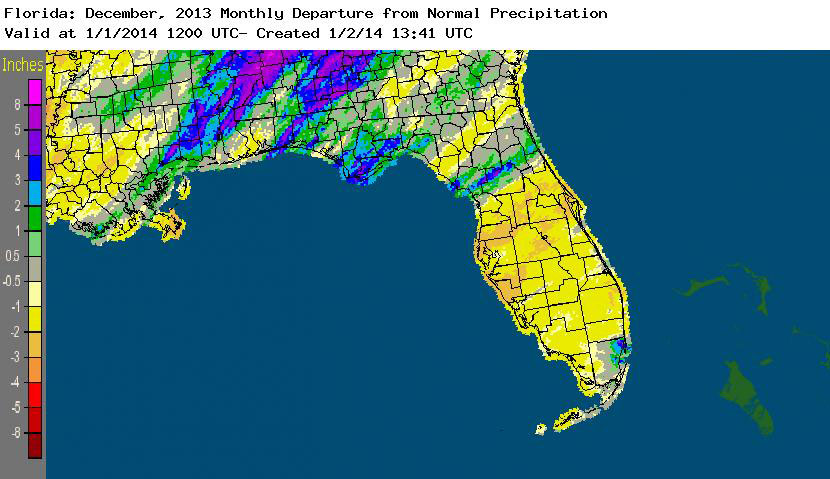 Hazardous weather events in December. Only 20 severe weather reports were made across the state in December. Heavy rain was reported in and around the Vero Beach area on the 1st, with 5.46” of rain reported in almost 4 hours. Dense fog was reported in Tallahassee on the 6th with visibility less than 1/8 of a mile, and widespread dense fog was observed on the west side of Lake Okeechobee in La Belle, Clewiston, and Immokalee on the 7th. Straight-line winds, estimated at 100 mph and associated with a thunderstorm north of Ocala, caused damage in Anthony, FL, where a barn was moved off its concrete foundation on the 14th. On the same day, an EF1 tornado moved through Palm Coast, (Flagler County, FL), uprooting trees and damaging power lines along its path. The day after Christmas, heavy rain was reported in between Homestead and Miami; early in the morning on the 29th, high winds from a thunderstorm were reported at Mexico Beach, FL.

Table 4: Breakdown of storm reports submitted in Florida during the month of December (compiled from Southeast Regional Climate Center). 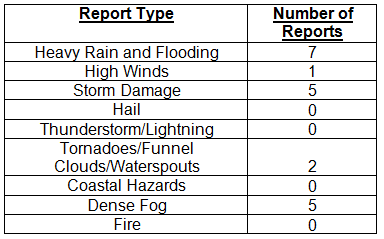 Agricultural and other climate related impacts. In December, rain was limited across the state, and farmers in the northern part of the state were finishing up harvest of cotton, soybeans and continued planting oats, wheat, and rye. Light frost during the month ended the warm season perennial pastures in the Panhandle. Cattlemen were feeding hay and supplements to stock as pasture conditions ranged from poor to good condition and winter grazing was stressed due to drought. Irrigation in the citrus region continued as dry conditions persisted, and workers were reporting small-sized fruits in all varieties. The warmer-than-normal temperatures led to accelerated vegetable growth in many south Florida counties, and sugarcane harvesting proceeded on schedule.

Early in December, there was an expansion of dry conditions (D0) in south Florida to include portions of Collier and Lee counties. The lack of rain in the beginning of December caused the introduction of D0 into the northwest Panhandle (Escambia, Santa Rosa and Okaloosa counties) and in part of central Florida (Orange, Osceola, Seminole and Volusia counties). However, rain in the northeastern portion of the state alleviated some of the dryness around the areas of Jacksonville, St. Augustine, Ocala and Gainesville. Some residual dryness remained in Nassau, Baker, Columbia and Hamilton counties by the end of the month, with D0 conditions still present along portions of the east coast and citrus growing region. The CPC forecast for the next three months (January, February, and March) is predicting below normal rainfall, so the chance of seeing more dry conditions, and potentially drought, introduced into the state remains high.

Figure 2: Drought conditions in Florida as of December 31, 2013 (courtesy of U.S. Drought Monitor). 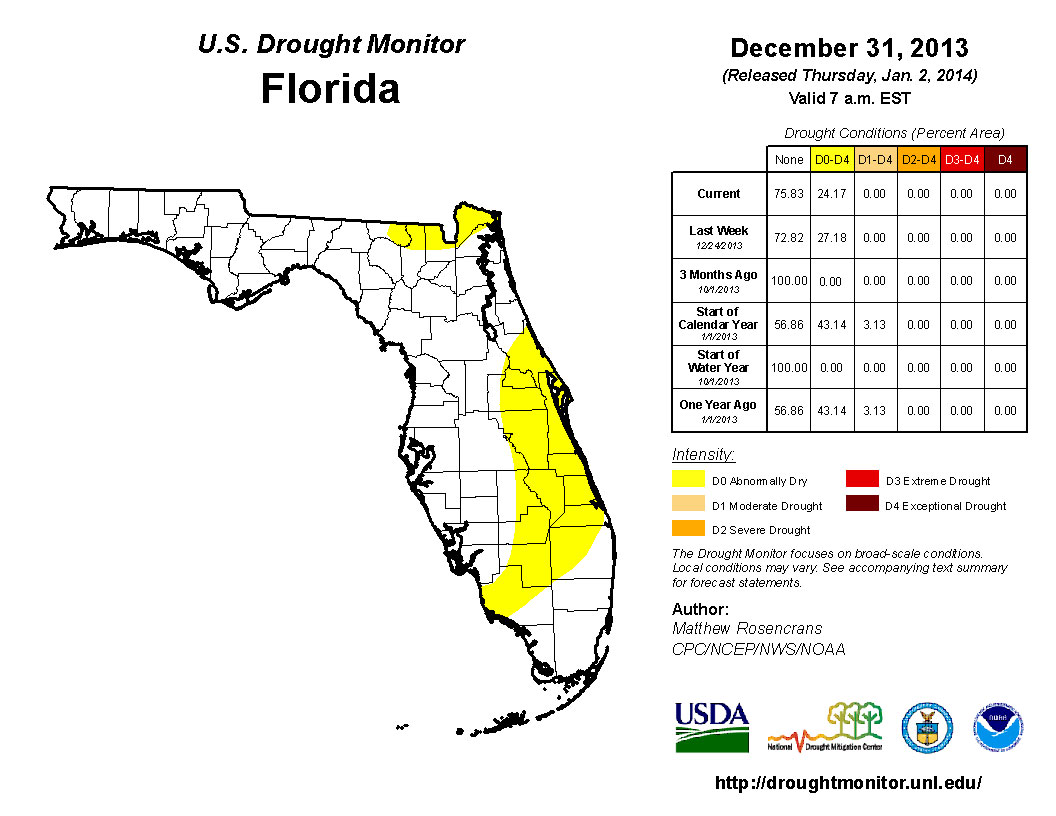 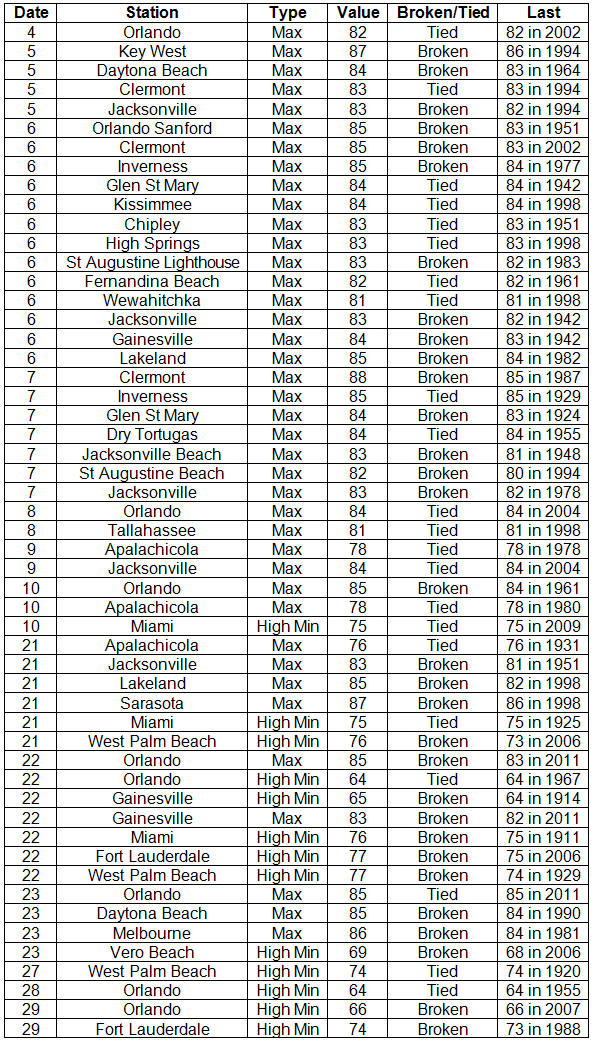