Rainfall totals varied across the state in December. While most of the state recorded below normal rainfall totals for the month (Table 2), some small portions of the state actually had above normal precipitation in December (Figure 1). Coastal portions of Collier County, along with Palm Beach and Martin counties, areas around the northern shore of Lake Okeechobee, and a line from Gainesville to St. Augustine recorded monthly rainfall totals that were more than 2” above normal. However, most of the state saw between 1” and 2” below normal, and December 2012 was the 10th driest December on record in Pensacola. 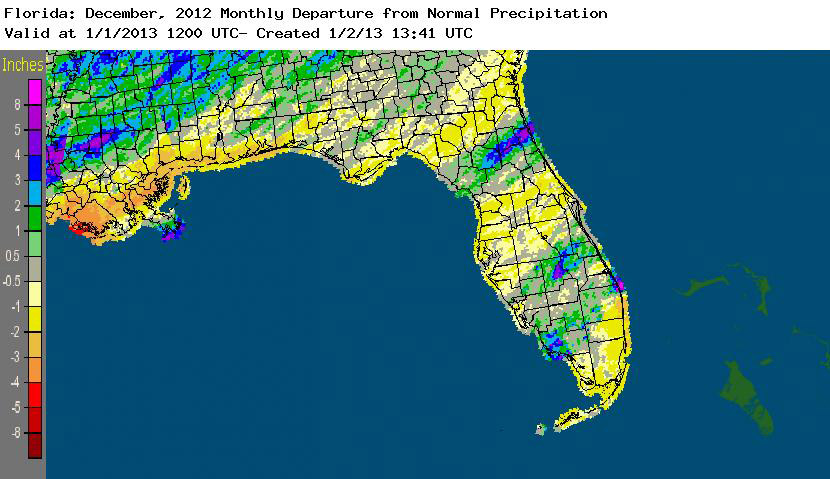 ENSO-neutral conditions continue in the Pacific. As of December 30th, the Climate Prediction Center (CPC) reported that ENSO neutral conditions continue for the equatorial Pacific. Equatorial sea surface temperatures (SST) were near average across much of the Pacific Ocean. ENSO-neutral conditions are favored to continue through the winter of 2012-2013 and into spring 2013. CPC predicts above normal temperatures for the state, with above normal precipitation for northern Florida in January, but below normal precipitation in peninsular Florida through March.

Hazardous weather events in December. December was a quiet month for severe weather across the state with only 81 severe weather reports. Dense fog was reported along coastal portions of Nassau, Duval and St. Johns counties during the early morning hours of December 8th, reducing visibility to less than ¼ mile in some locations. On December 10th, a storm system caused multiple severe weather reports in portions of inland and coastal central Florida. Waterspouts were observed over New Smyrna Beach and Lake Apopka, while a funnel cloud was reported in Lakewood, FL, and a tornado in Edgewater, FL. Areas of Alachua, Marion and Orange counties saw heavy rain and storm damage from the same storm system. Multiple flooding reports were made on the 11th in the Jupiter, FL, area after unofficial rainfall totals measured 3-10” in portions of Palm Beach County. Law enforcement officials in Hendry, Glades and Collier counties reported widespread dense fog on the 13th, with visibilities reduced to ¼ mile. Storms caused damage in portions of the Panhandle on the 17th, with multiple reports of storm damage and wind gusts over 40 mph. A strong cold front moved through the state on the 20th – 22nd, which spawned a tornado near Perry, FL, and caused storm damage across Florida. Trees were knocked down from Freeport to Jacksonville, and high wind reports were made from every portion of the state, with the highest reported wind speed being 45 mph at Shell Point. Another vigorous cold front pushed through the portions of the state on the evening of 25th through the morning of the 26th. The squall line produced a waterspout near Santa Rosa Beach on the 25th, and caused storm damage and high winds as it pushed through north Florida.

Table 4: Breakdown of storm reports submitted in Florida during the month of December (compiled from Southeast Regional Climate Center).

Agricultural and other climate-related impacts. The lack of rainfall at the beginning of the month further depleted the topsoil moisture levels across the state. Some citrus trees were straining to keep the fruit set healthy and growing, and some growers were beginning to irrigate their groves to keep moisture levels from becoming too short. The winter field crops struggled due to the lack of rainfall; however, the above-normal temperatures resulted in good growing conditions for numerous vegetable varieties across the state. Strawberries were already being marketed. By mid-month, some rainfall in central Florida had reduced the need for irrigation for citrus and winter crops, but slowed some of the work in the fields. Other portions of the state still relied heavily on irrigation, as parts of the state were still dry due to the lack of rainfall. However, by the end of the month, two rounds of rainfall boosted soil moisture levels and further eased some of the irrigation demands on Florida agricultural. Some of the storms associated with the two strong cold fronts did cause localized wind damage. The passage of the fronts did bring sub-freezing temperatures to parts of the state and growers prepared to check the damage done to crops. Fruit and vegetable growers continued to market a variety of crops, and orange harvesting continued at a rapid pace.

Figure 2: Drought conditions in Florida as of December 25, 2012 (courtesy of U.S. Drought Monitor). 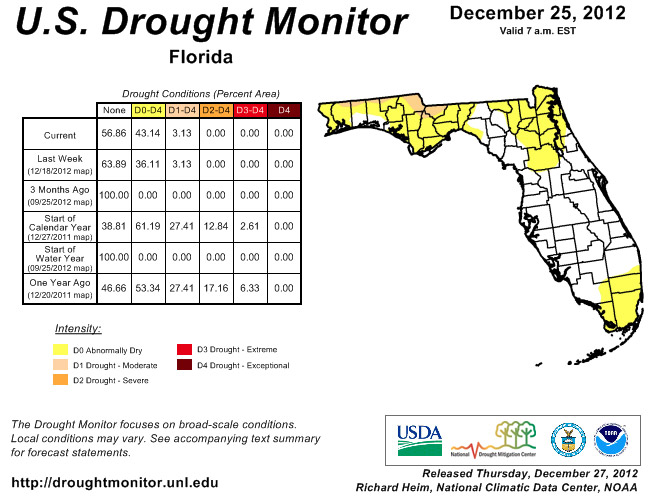 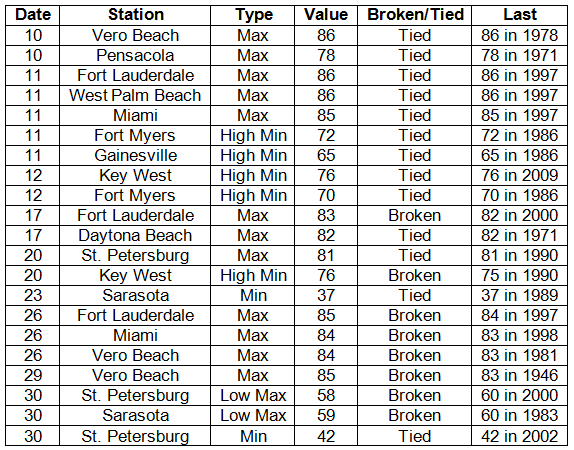