Average temperatures much below normal in December. Average temperatures in December were much below normal (Table 1). At Tallahassee, Melbourne, Orlando, Tampa, Miami, and Key West, as well as numerous other sites across the state, this was the coldest December on record. Many long-standing daily minimum records were tied or broken (Appendix). A minimum temperature of 40° F at Fort Lauderdale on the 7th broke a record for that date set in 1841. On the 15th, minimum temperatures of 46° F at Key West and 31° F at Sarasota broke records in existence since 1885 and 1915, respectively. Later in the month, minima at Tallahassee (18° F), Jacksonville (20° F), and Gainesville (21° F) broke records in existence since 1925. Further, many record-low maximum temperatures were observed during the month.

December rainfall totals below normal. Rainfall totals for December were below normal in all areas of the state (Table 2). An aerial perspective is given by Figure 1. Jacksonville, Orlando, Tampa, and Key West all received less than one inch of rain during December. In contrast, a daily total of 1.87 inches at Melbourne on the 18th broke the previous record of 1.68 inches observed in 2009. A trace of snow was observed at several places in the north on the 25-26th, including Pensacola, Apalachicola, Tallahassee, and Jacksonville. 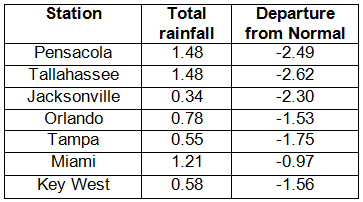 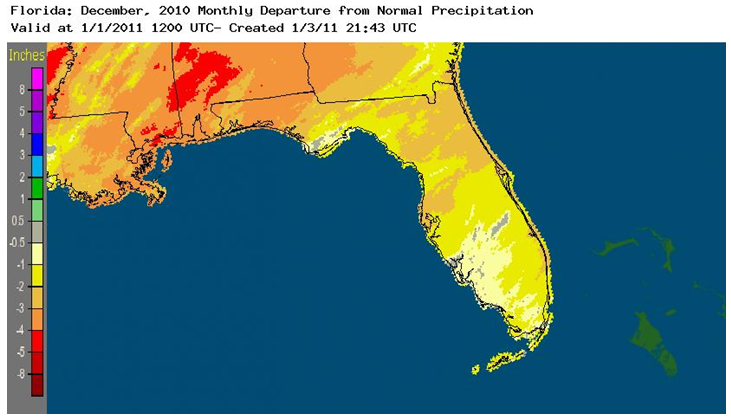 La Niña continues during December. Sea surface temperatures in the equatorial Pacific Ocean continued below normal during December, denoting a continued cold phase of ENSO, or La Niña. Winter dryness is associated with a cold phase of ENSO. In addition, cold phases of the large-scale North Atlantic Oscillation (NAO) and the Arctic Oscillation (AO) aided the advances of frigid air into the state.

Hazardous weather. No tornadoes occurred during December. On the 11th, thunderstorm wind gusts to 70-80 mph damaged houses, mobile homes, trees and roofs near Milton. Severe drought conditions persisted from the east-central coast into the northeastern portion of the state.

Agricultural and other impacts. The majority of field crops were finished for the season and did not suffer damage from the record cold of December. However, in the south tomatoes, peppers, and sweet corn suffered some freeze damage. An extended period of freezes in mid-month near Lake Okeechobee severely damaged sugarcane. Pastures in the north were heavily damaged by freezing temperatures. Although damage assessment is incomplete, some fruit damage and defoliation were evident after two major freezes in citrus areas. Continued drought conditions provided favorable conditions for the onset of several wildfires around the state.