December rainfall totals well above normal at northern, central, and east-coastal areas. Rainfall totals for December were more than three inches above normal in northern and central parts of the state, as well as several east-coastal areas (Table 3). Pensacola and Tallahassee were more than nine and six inches above normal, respectively. Numerous daily precipitation records were tied or set during December (Table 4). Several of these records had existed for many years. Of particular note, 5.74" on the 2nd at Tallahassee broke a daily record established in 1896, and 0.42" at Key West on the 5th broke a daily record established in 1886.

A graphical depiction of the monthly rainfall departure from normal (inches) for December is given in the figure below (courtesy of NOAA, NWS). Amounts of more than eight inches above normal are evident in the northwest. 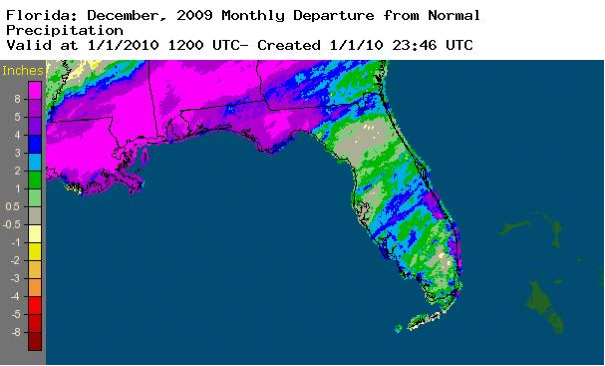 Also, a graphical depiction of annual rainfall departures from normal for 2009 is given in the Appendix.

Agricultural and other impacts. Persistent wet conditions from early in the month have hindered fieldwork in the north. Fall and winter plantings were also slowed by wet ground. Sugar cane harvest was active despite some delays due to locally heavy rain. A variety of winter vegetables were harvested, although wet conditions caused some disease and quality problems.

A graphical depiction of the annual rainfall departure from normal (inches) for 2009 is given in the figure below (courtesy of NOAA, NWS). 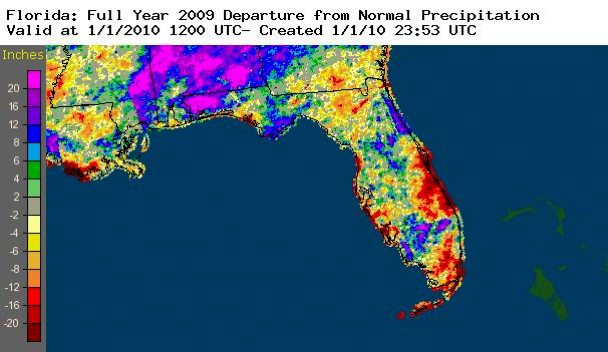