December warms after a cold fall season. After a cold beginning to the fall season, where temperatures from late October through November averaged around 5 degrees below normal, a warm pattern set in for the month of December. Average temperatures ranged from 1 to 2 degrees above normal in central and south Florida to 3-4 degrees above normal over north Florida. The coldest temperatures of the month occurred after a fairly vigorous cold front passage on December 2nd and 3rd, with freezing temperatures reported as far south as Ocala on the morning of the 2nd. The second half of December was quite warm for the entire state with only one notable cold front passage on or around December 22. With the exception of this date, almost all other days in the second half of December have seen daily temperatures warmer than normal, up to 10 to 12 degrees warmer in most cases. A record low temperature for the date was set at Sarasota-Bradenton with a recording of 39 degrees on the morning of December 3. Numerous record high temperatures were set or tied across north Florida between December 19th and 25th.

December generally drier than normal. Nearly all locations in Florida recorded below normal rainfall during the month of December. Departures from normal ranged from 1 to 3 inches for the month. The state experienced one major rain event on December 10th and 11th from a low pressure system that developed in the northern Gulf of Mexico and moved slowly inland across the Panhandle. Precipitation totals from this system were heaviest at Okaloosa County where totals from 4 to 6 inches were reported and in Jackson and Holmes counties, where totals reached 6 to 8 inches. The remainder of the state generally saw totals between half and inch to one inch. One daily record for rainfall was set at Fort Myers with 1.83 inches accumulating on December 11. 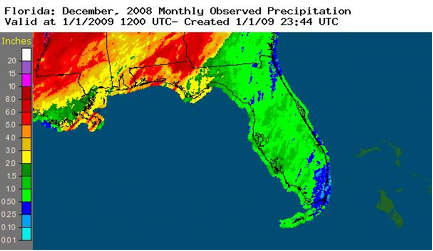 Figure 1: Radar-derived rainfall totals for the month of December (inches)

Other weather and climate impacts. Much of December was free from any severe or high impact weather events, with a few minor exceptions. The heavy rain event mentioned above did result is some minor flooding of small rivers and streams in areas around Tallahassee and the western Panhandle. The same system was also responsible for scattered reports of wind damage across north Florida and Pinellas County. Otherwise, the freezing temperatures seen across north Florida on December 2nd and 3rd were not overly damaging and well within the range of expected weather for this time of year.

In a broader scope, it appears that the tropical Pacific Ocean has fallen back into the La Niña phase (colder than normal waters along the equator in the eastern and central Pacific). La Niña is known to bring warm and dry winters to Florida and the Southeast and is likely responsible for the warming (and drier) trend seen in the second half of the month.

Impacts on agriculture. The unseasonably warm second half of December has slowed chill accumulations over much of the area. Chill accumulation over the winter is important to flowering fruit crops such as blueberries, peaches, and strawberries and promotes proper fruit setting. Chill accumulation was ahead of normal during the colder period of late October through the first week of December, but has slowed considerably during the recent warm spell. The warmer temperatures have enhanced development of other crops, namely winter vegetables and winter wheat. Winter forages for cattle were doing well with the warm temperatures in areas of north Florida that have received adequate rain. Dry and warm conditions in the citrus belt have producers irrigating more.