Rainfall totals in August were much above normal over most of the panhandle, near to above normal in the western one-third of the peninsula, and below normal in many areas of the eastern peninsula and Keys, with considerable local variability characteristic of the summer months in Florida (Figure 1).  Station anomalies ranged from -5.51” at Melbourne to +6.83” at Tampa (Table 2 and Appendix 1) (Figure 1). A few 24-hour precipitation records broken for the month (Table 3).

Figure 1. A graphical depiction of the monthly rainfall departure from normal (inches) for May is given in the figure below (courtesy of NOAA, NWS). 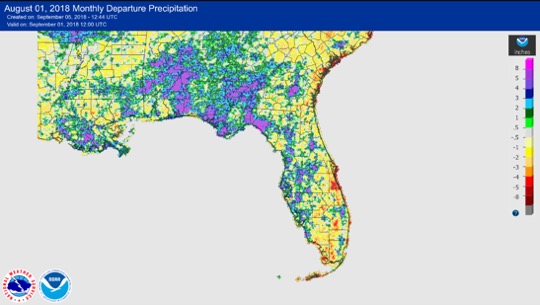 According the Local Storm Reports (LSRs) issued by the local National Weather Service (NWS) offices serving Florida, 208 instances of hazardous weather were reported across the state in August 2018.

Table 4. Breakdown of storm reports submitted in Florida during the month of August. (Compiled from Iowa State University/Iowa Environmental Mesonet.)

At the end of August, according to the U.S. Drought Monitor, all of Florida was drought free, continuing conditions that have been present since the late spring.  Western Escambia County, accounting for 0.26% of the state’s land area, had abnormally dry conditions in the second half of the month, owing to rainfall deficits over the last 30 to 60 days.

As of 5 September, the Lake Okeechobee water level was at 14.65 ft. above sea level, which is above average for this time of the year. 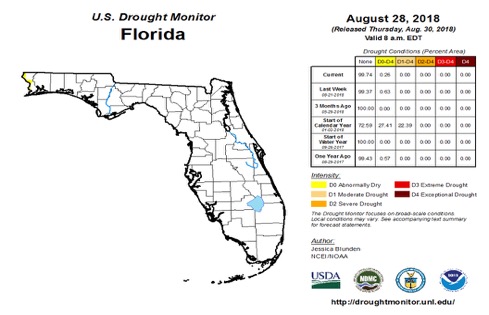 A major theme through the month has been the continuation of very wet soil conditions on the panhandle, which has hindered the cutting of hay and the harvest of peanuts at times.  Flooded low-lying areas in the St. Johns River valley negatively impacted cattle pasture lands.  Summer crops, including avocado, bitter melon, boniato, malanga, mango, and okra, were harvested; good conditions generally persisted for citrus, allowing spray schedules to be followed and grove maintenance performed.  The preparation of land for fall vegetable cultivation was managed as conditions allowed and planting started.

Appendix 1
Additional May Departures from Normal Data for Florida Locations

Appendix 2
Select daily maximum and minimum temperature records (oF) tied or broken during May.
(Compiled from NOAA, NWS)

*This value ties the all-time highest minimum temperature ever recorded at Melbourne (records back to 1937), last set on 14 July 2017.