Rainfall totals were varied across the state in August.Portions of the western coast of Florida had well above normal rainfall, while the Panhandle and southern Florida recorded below normal rainfall (Figure 1). Departures from normal roughly ranged from -1.69” to 8.73” (Table 2 and Appendix 1), though localized parts of the state saw rainfall totals that were as much as 5.00” below normal to 8.00” above normal (Figure 1). August 2015 was the 3rd wettest in Tampa and Orlando. There were multiple 24-hour precipitation records broken for the month (Table 3). 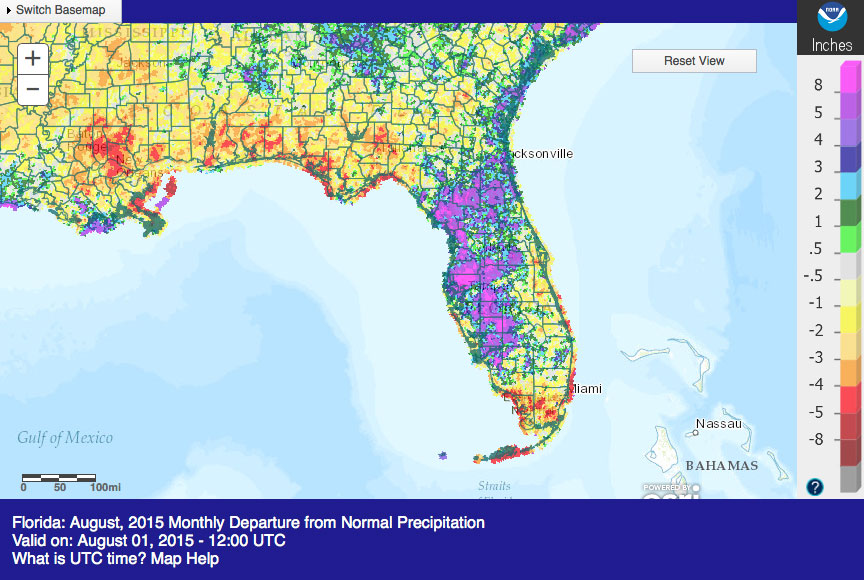 El Niño Conditions are Present in the Pacific.
Based on current data and forecast models, the Climate Prediction Center (CPC) will keep the ENSO Alert System at an El Niño Advisory. El Niño conditions are present, and positive equatorial sea surface temperatures (SST) anomalies continue across most of the Pacific Ocean. There is approximately a 90% chance that El Niño conditions will continue through the Northern Hemisphere winter 2015-2016, and around an 85% chance it will last into early spring 2016. CPC predicts above normal temperatures and normal precipitation across the state through November 2015.

Hazardous Weather Events in August.
There were a total of 398 severe weather reports made in Florida during August. An area of low pressure in the eastern Gulf of Mexico brought heavy rains across portions of Central Florida for the first three days (1st-3rd) in August. Major flooding was reported in the greater Tampa Bay area, communities along the Coast, and interior Peninsula locations. Road were impassable in some locations and rising rivers and streams cause evacuations in some low-lying areas. On the evening of the 3rd, after funnel clouds were observed and photographed in Delray Beach and an EF0 tornado was reported near Florida Gardens and Riviera Beach. Damage from the tornado was minimal with minor structural damage and downed trees reported. Strong thunderstorms on the 7th caused storm damage across portions of the Big Bend and northeastern Florida. Jacksonville, Lake City, and Tallahassee were just a few of the locations that reported downed trees from the storms. A tornado briefly touched down on the 8th near Indian Pass, FL (Gulf County) causing minor tree damage. Forty Army Rangers were evaluated and 21 were hospitalized after a lightning strike on Eglin Air Force Base on the 12th. The Rangers were performing lightning training protocols at the time of the incident. On the 14th, the Hendry County Sheriff’s Office reported minor damage to a shed and trees from an EF0 tornado just outside of Clewiston, FL. Lightning struck a home near the University of North Florida in Duval County on the 19th and lightning started an apartment fire the following day in the same area. On the 29th, lightning caused electrical damage to a home in Fort Myers, FL. Various convective and sea breeze thunderstorms caused hail, high winds, storm damage and heavy rains across the state during the entire month of August.

Agriculture Related Impacts.
At the beginning of August, topsoil moisture levels were at mainly adequate, though some surplus values were reported across the state. Corn harvest was underway in Jackson, Walton, Madison and Hamilton counties. Hay was baled in Washington County and army worms were in abundance in Pasco County. Heavy rains at the end of July and beginning of August in southern portions of the Big Bend caused flooded fields. Mold and mildew was reported in crops in Taylor, Dixie, Levy, Citrus, Hernando and Pasco counties. Pastures across the state were in good condition, though some areas had standing water in low-lying areas. Counties in southwest Florida continued to prepare land for the fall planting season. By the middle of the month, Panhandle crops were starting to show stress due to the warm temperatures and lack of rainfall. Standing water in fields and pastures was still an issue for counties in the Big Bend and central Florida and some ranchers were selling off cattle. Peanut pegging was about 98% complete by the end of the month. White mold was found in peanuts and the kudzu bug was causing issues with soybeans in Okaloosa County. The sugarcane crop received needed rain and looked in good condition. Orange groves in the western growing region were inaccessible due to high water, and the some fall vegetable planting was delayed due to soggy fields. Elsewhere, irrigation was being used in areas of the state impacted by continued drought conditions.

Drought Related Impacts.
At the end of July, nearly 40% of the state was experiencing abnormally dry (D0) or drought conditions, with the main concentration along the east coast of the state, the Big Bend, and in portions of northeastern and southern Florida. By August 4th the area of D0 in the western Panhandle counties was extended along the coastal portions of Bay County and moderate (D1) conditions were introduced into Santa Rosa County, while beneficial rains eased some of the drought conditions from Brevard County to Palm Beach County. As the month progressed, D0 in the southern part of the state expanded back into Collier and Hendry counties while the area of extreme (D3) drought shifted away from the coastal portions to the interior of Dade and Broward counties and D3 was reported in Monroe County. By the end of the month, rainfall in the northeast region had eased most of the D0 conditions, with the exception of lingering dryness in Volusia County. The lack of rainfall led to the expansion of D0 across most of the Panhandle counties. In South Florida, there was a slight expansion of severe (D2) and D3 drought conditions across Broward, Dade and Monroe counties. Based on census data, roughly 5.5 million Florida citizens are currently being impacted by drought conditions reported in nearly 40% of the state. At the end of the month, the water level in Lake Okeechobee increased to just over 13 ft., mainly due to rainfall across the northern part of the basin. 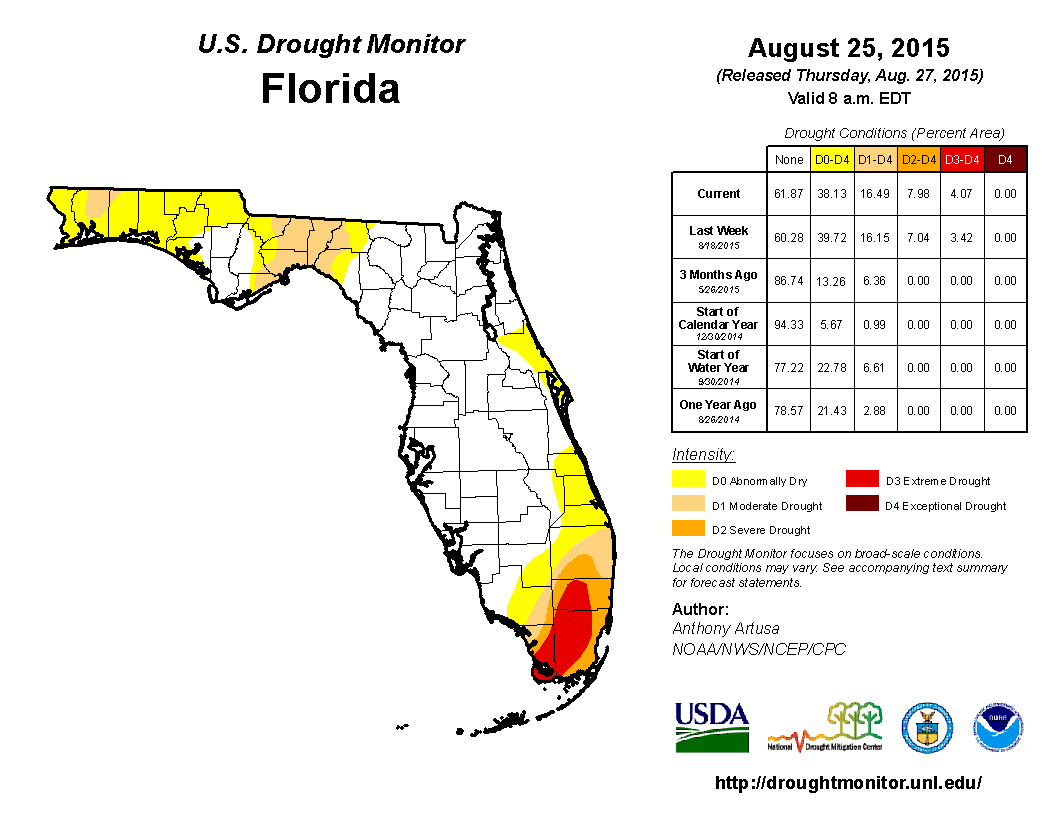