Average temperatures were above normal across the state in August. The departures for average temperatures in August 2014 were above normal across the entire state and the departures ranged from 0.2˚F in Pensacola to 2.8˚F at Tallahassee. (Table 1 and Appendix 1). August 2014 was the 2nd in Fort Myers, the 3rd warmest on record in Tallahassee and Key West, the 6th warmest in Daytona Beach and Miami, the 7th warmest in Tampa and the 9th warmest in Orlando and West Palm Beach. Royal Palm Ranger Station reported 101˚F on the 28th, the highest temperature in Florida for the month. Tallahassee reported a maximum temperature over 95˚F for 19 days in August and 2 days over 100˚F, and Apalachicola recorded a maximum temperature of 102˚F on the 24th, one degree off from tying the all time record set in 1931. Despite the record warm temperatures and heat wave at the end of the month, there were some minimum temperatures records tied or broken when cold fronts impacting the state earlier in the month (Appendix 2).

Rainfall totals varied across the state in August. Interior portions of the southern Florida Peninsula reported monthly rainfall totals well above normal, while most of the rest of Florida saw below average rainfall during July (Figure 1). Departures from normal roughly ranged from -5.39” to 0.19” (Table 2 and Appendix 1), though localized parts of Florida saw rainfall totals that were as much as 8.00” below normal to over 8.00” above normal. August 2014 was the 2nd driest in Tallahassee (the driest was in 2011, with only 2.03” reported for the month), 2nd driest in Daytona Beach (the driest was in 1963, with only 2.01” reported for the month) and it was 4th driest on record in Pensacola. There were multiple 24-hour precipitation records broken for the month (Table 3). The summer (June-July) was the driest on record in Tallahassee (only 8.99”, which is -13.26” below normal) and the 2nd wettest on record in Miami (38.98”, which is 13.93” above normal). 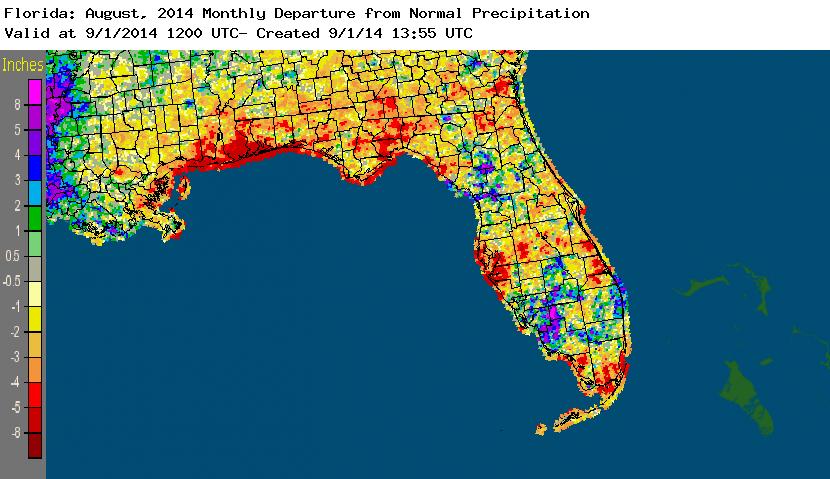 ENSO-Neutral Conditions Continue in the Pacific.
Based on current data and forecast models, the Climate Prediction Center (CPC) continue to have an El Niño Watch in place. Though Neutral ENSO conditions continue to be reported, positive sea surface temperatures (SST) anomalies continue in the eastern Pacific Ocean and just west of the Date Line. The chances of an El Niño event have decreased to about 65% during the Northern Hemisphere fall and early winter. CPC predicts above normal temperatures across northeast portions of the state and above normal precipitation in the southern Peninsula through November 2014.

Hazardous Weather Events in August.
There were a total of 208 severe weather reports made in Florida during August. On the 3rd, lightning struck and injured a man in downtown St. Petersburg, FL. On the same day, a severe thunderstorm produced golf ball sized hail and high winds in Hosford, FL and a waterspout was spotted on Lake Okeechobee. Heavy rains, over 4 inches in less than a hour, in the Naples area caused urban flooding, with some roads under 2 feet of standing water. Multiple reports of a funnel cloud were made in New Port Richey on the morning of the 6th, though there was no confirmed touchdown. Thunderstorms on the 8th and 9th produced wind gusts of over 40 mph in the Titusville area, and storms on the 10th and 11th caused high winds, hail and minimal storm damage in portions of central Florida from Tampa to Daytona Beach. On the 12th, a person was injured in Milton, FL when a secondary lightning strike struck the vehicle he was leaning against. Two mature waterspouts were reported in Biscayne Bay on the 14th, along with 45 mph wind gusts in Vero Beach, and funnel clouds were seen over Palm Beach Gardens and Pompano Beach Airpark. Also on the 14th, thunderstorms dumped heavy rainfall in parts of south Jacksonville, causing some streets to flood. A USPS worker sustained serious burns when lightning struck near his truck and traveled through the vehicle as he was touching it in Lauderdale by the Sea on the 15th. At the same time, an estimated EF0 tornado touched down near the intersection of Indrio Road and US 1 north of Fort Pierce, FL. Another EF0 tornado was spotted on the 16th, this time in Boca West, near Clint Moore Road and the Florida Turnpike. Back to back evenings of thunderstorms on the 18th and 19th, caused pea-sized hail, high winds and localized storm damage in parts of northeast Florida, especially around the Jacksonville area. A strong storm on the 20th caused power outages in Wellington and there were reports of hail in the same area. Thunderstorms in Orlando, Palatka and Tallahassee caused downed trees and power lines, with storm damage different structures and some dime sized hail reported from those locations on the 21st. Winds up to 60 mph were reported with an intense line of thunderstorms that moved through Levy county on the 22nd. On the 24th, a waterspout was reported offshore in Crystal River, FL and sea breeze thunderstorms produced high winds along portions of Pinellas, Manatee, Sarasota, Charlotte and Lee counties. Heavy rain and dangerous lightning were reported in Gainesville on the 30th and on the 31st a woman was struck and injured by lightning in Chiefland, FL.

Agricultural and other climate related impacts.
At the beginning of August, topsoil and subsoil moisture levels across the state were running more than 75% adequate and about 10%at surplus. Hay continued to be cut in the Panhandle, north and central Florida; although, army worms were reported found in hay, pasture, soybeans and peanuts. Peanut pegging was reported at 95% and farmers in southwest Florida continued land preparation for fall planting. Corn and corn silage harvesting continued in portions of the state and water levels beginning to rise in ponds and wetlands in parts of south Florida. Drier conditions through the month led to a decrease in surface and sub-surface soil moisture levels. Polk County began preparations for strawberries mid-month, while land preparation and setting down plastic for fall planting continued in many southwest Florida counties. Extreme heat at the end of the month made for unsuitable working conditions across the state, stressed cattle and contributed in decreased topsoil and subsoil moisture levels.

The state started the month of August with abnormally dry conditions (D0) shown for most of the Big Bend and Panhandle counties after 3-months of below normal precipitation had been observed. Tallahassee reported its driest summer on record (back to 1893) with more than 12.00” below normal rainfall for the June, July and August, and Jacksonville reported its 7th driest summer on record (more than 8.00” below normal). The lack of rainfall in the northern part of the state lead to deteriorating conditions in portions of Gadsden, Jefferson, Leon and Wakulla counties were moderate (D1) drought conditions were introduced. The area of D0 in Panhandle and Big Bend expanded east, to portions of the Suwannee River watershed. In the Peninsula, the summer rains, while less than normal, inhibited any southward expansion of dryness during the month and Miami area reported its second wettest summer on record (over 14.00” above normal). The water levels in Lake Okeechobee were currently at 14.53 ft., which is up from the end of June, but below the lake level at this time last year (2013). 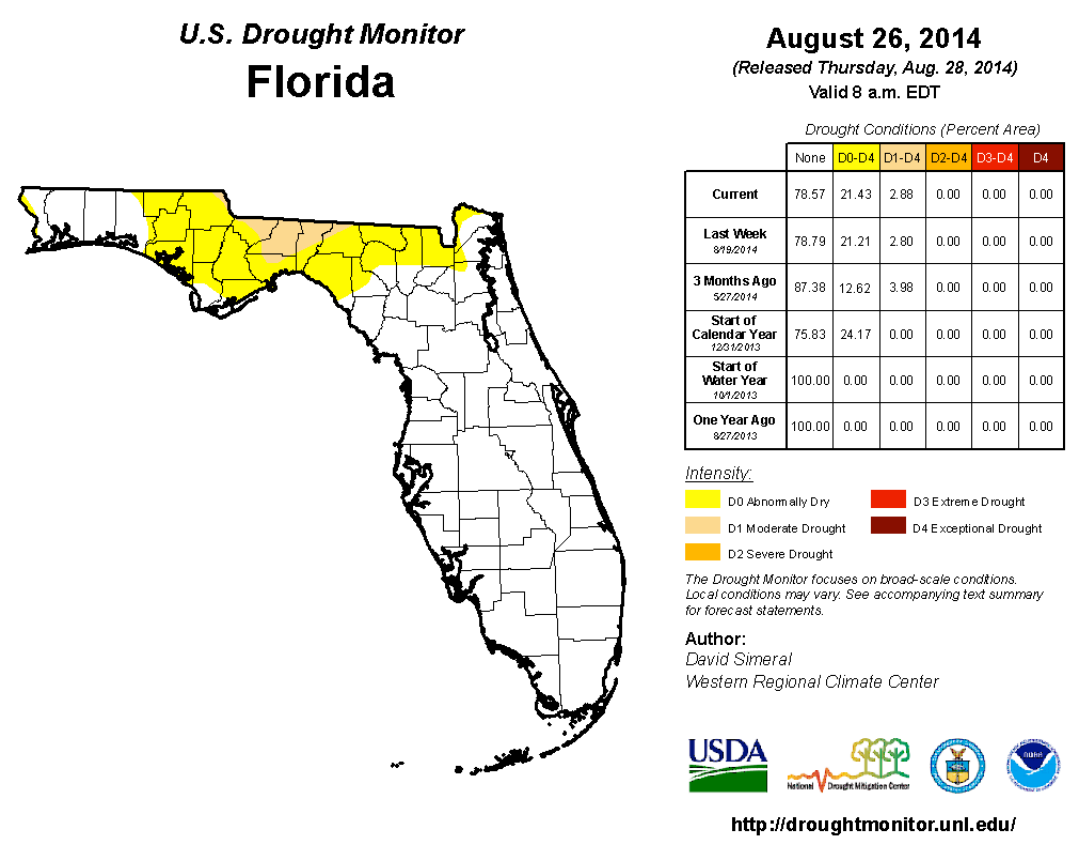 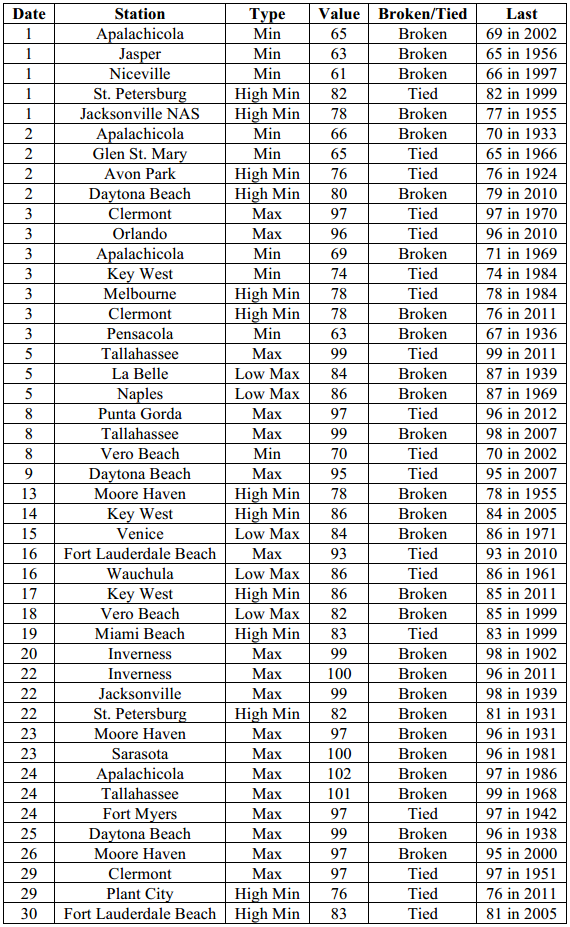