Rainfall totals varied across the state in August. Rainfall totals across the state varied in August (Table 2). Portions of the Big Bend, Panhandle and the west coast of Florida recorded up to 8 inches above normal precipitation, while portions along the east coast from Titusville to the Keys, including most of Dade and Monroe counties, had up to 5 inches below normal rainfall (Figure 1). The additional rainfall this summer has prompted releases of Lake Okeechobee to alleviate stress on the Herbert Hoover Dike, but the releases are also being blamed for the red tide that killed 133 manatees near Fort Myers and toxic algae blooms in the St. Lucie River. August 2013 was the driest on record at Vero Beach and 8th wettest on record in Tampa. Numerous 24-hour precipitation records were broken for the month (Table 3). 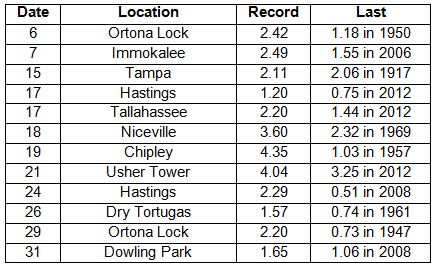 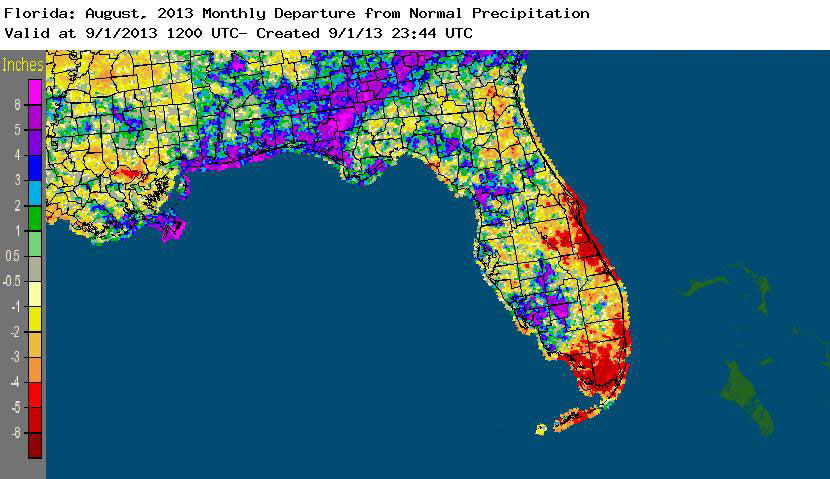 ENSO-neutral conditions continue in the Pacific. Neutral ENSO conditions continue to be reported for the equatorial Pacific, with the equatorial sea surface temperatures (SST) near average across the western and central Pacific Ocean and below average in the eastern Pacific. ENSO-neutral conditions are favored to continue through the fall of 2013. The Climate Prediction Center (CPC) predicts normal precipitation and temperatures for the state through November.

Hazardous weather events in August. In August, 289 severe weather reports were made across the state. The month started off with an EF2 tornado touching down just east of downtown Jacksonville, near the Jacksonville Arboretum and Gardens. The sheriff’s office reported about 30 homes and structures were damaged from the tornado. The same storm produced heavy rains, high winds and flooding in and around Jacksonville. On the 3rd, high winds were recorded up and down the east coast of the state. Lightning caused a house fire on the 6th in Milton, while a female was struck near Holiday, FL, on the 7th. High winds were measured along the Keys on the 9th, and a severe thunderstorm caused damage around Cape Coral on the same day. Heavy rains caused flooding around Marianna, FL, on the evening of the 16th and into the early morning of the 17th. From the 17th until the 19th, some roads in Panama City Beach were under water as heavy rains trained over the area, while flooding was reported in De Funiak Springs, Vernon and Freeport. On the 18th, two people died after being caught up in rip currents near Miami Beach, FL. Strong storms produced high winds, damage and hail in and around both Tampa and Brandon on the 20th. On the 21st, a severe storm near Clearwater, FL, produced pea to dime sized hail and wind gusts of 40 mph. Multiple locations in the central part of the state reported heavy rain, localized flooding, lightning strikes and storm damage on the 22nd and again on the 23rd. Waterspouts were spotted near Key Largo, Key West, Stuart and Dunedin, FL, on the 26th and 27th. A severe thunderstorm moved through Leon and Jefferson counties on the evening of the 30th, causing storm damage, and the NWS office in Tallahassee reported nearly 1,000 lightning strikes in an hour associated with the thunderstorm.

Table 4: Breakdown of storm reports submitted in Florida during the month of August (compiled from Southeast Regional Climate Center).

Agricultural and other climate related impacts. Topsoil and subsoil were near 100% at adequate or surplus levels at the beginning of the month. Jackson, Walton and Flagler counties reported extremely wet hay fields and were unable to cut, while Taylor and Dixie counties were able to get a first cut. Pastures showed signs of yellowing due to the rains, and there were concerns about the nutritional value of the forage. Lower yields of cotton, soybeans and tobacco were reported, along with yellowing of peanuts and fungus in pecans. Heavy rains delayed fall planting in the northern part of the state. A drier second week of August led to a decrease in the surplus water in both soil levels. With the fields drying out, corn was harvested in Jackson County. The cotton crop in Walton County was in fair condition, along with cattle conditions across the state. Forage conditions were still limited due to standing water across portions of the state. Citrus growing area was drought free, and orange and grapefruits were between golf ball and baseball sized. South Florida farmers prepared land for early active planting, laying plastic for fall vegetable and fruit crops. Pasture and forage declined seasonally as grass matures. By the end of the month, peanuts looked good in high, well-drained soil. Haying slowed due to rain, and quality of the hay was poor. Sugarcane preparations were being made, while tomatoes, peppers okra and sweet potatoes were planted in South Florida.

Despite below normal rainfall in portions of the state during August (Figure 1), Florida remained drought free since July 9th. September marks the peak month for tropical activity in the Atlantic, and, should a hurricane or tropical system track toward the state, impacted areas could see above normal precipitation. Water levels in Lake Okeechobee are about 15.5’, which is the highest level the Corps will allow during the hurricane season. The Herbert Hoover Dike, the 25’+ tall, 143-mile long gravel, rock, limestone, sand and shell dike built in the 1930s, is being watched closely as it is vulnerable to leaking and failure when the water levels get too high from heavy rains. In addition to the concerns about Lake Okeechobee, rivers in the northern part of the state have been at or above action stage during August. The saturated ground has led to extreme runoff, filling rivers to their banks. Fall is typically a drier season for the state, however, with the unusual weather patterns seen this summer, it’s difficult to say if precipitation will be normal despite the fact that the three-month outlook (Sept-Nov) from CPC shows average rainfall across the state.

Figure 2: Drought conditions in Florida as of August 27, 2013 (courtesy of U.S. Drought Monitor). 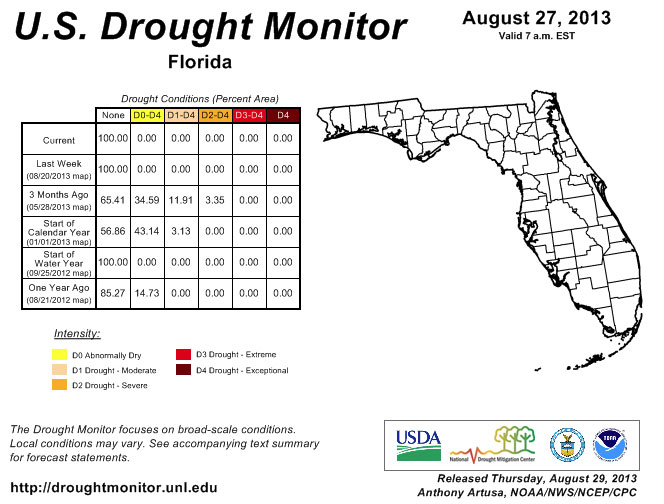 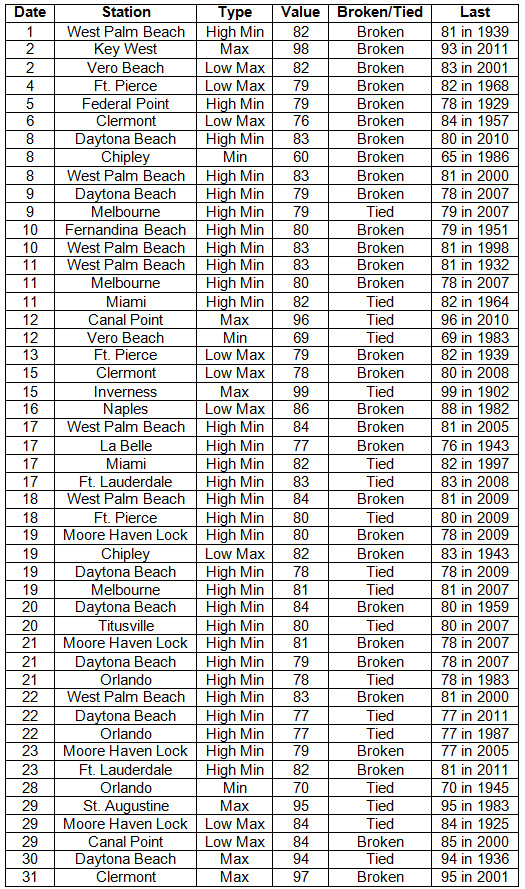