Further, the overall areal distribution of departures from normal rainfall during August is depicted in Figure 1. Departures from normal monthly totals range from much above normal in several areas near the Gulf coast and inland sections of the south to well below normal along the central east coast. A monthly total exceeding 20 inches was observed in coastal Levy County. 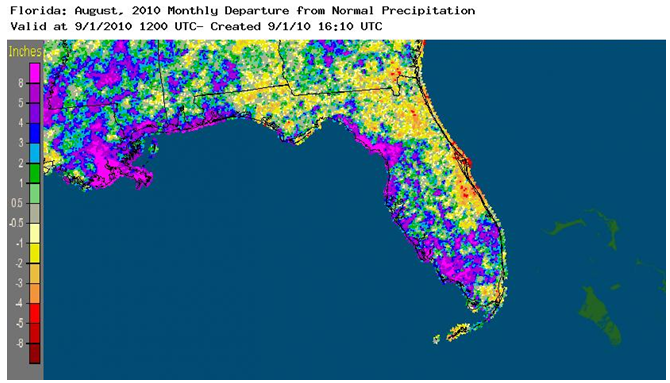 La Niña strengthens during August. Sea surface temperatures in the equatorial Pacific Ocean continued to cool during August and now clearly denote a cold phase of ENSO, or La Niña. The development of La Niña has little impact on climate in Florida during summer.

Hazardous weather. Thunderstorm winds produced only isolated reports of minor damage during August. Weak tornadoes caused minor damage near New Smyrna Beach and Boca Raton on the 7th and again at New Smyrna Beach on the 11th. Waterspouts caused minor damage when they moved ashore near Edgewater on the 11th and near Key Largo on the 30th. Tropical Depression 5 formed in the southeast Gulf of Mexico on the 10th. Rainfall along the Gulf coast was enhanced for the next two days as the depression drifted northwestward before dissipating.

Agricultural and other impacts. Hot, dry conditions early in the month stressed some field crops and pasture in the extreme northwest. Rainfall later in the month improved the condition of field crops in the northwest and forage in west-central areas. However, continued heavy rain in some areas of the northwest promoted white mold in some peanut fields toward the end of the month. Warm, humid conditions throughout the month provided excellent growing conditions for citrus and sugarcane in the south. Abnormally dry conditions persisted through the month near the borders with Alabama and southwest Georgia and along the east-central and northeast Atlantic coasts. 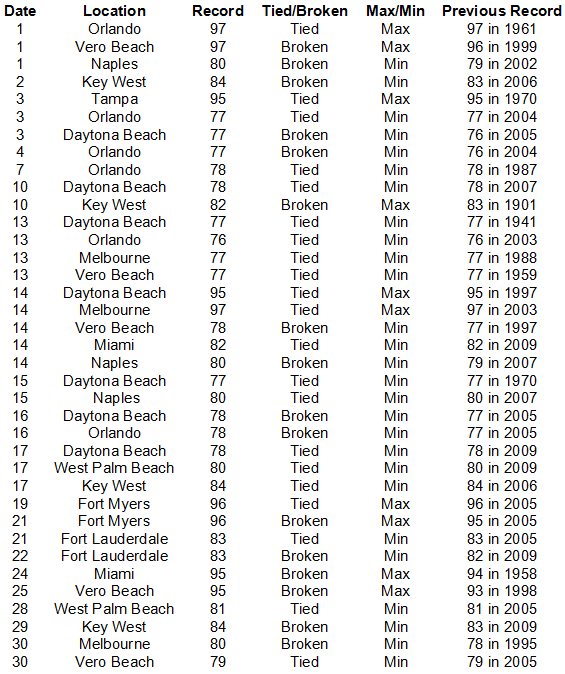