Rainfall totals in April were varied across the state. Rainfall totals in April 2017 were above normal for parts of North and Southeast Florida, including the Florida Keys, and below normal for the rest of the state (Figure 1). A significant portion of the state, particularly parts of Central Florida, received less than a quarter of the normal rainfall for the month. Departures from normal roughly ranged from -2.68” for Orlando to +1.88” in Key West (Table 2 and Appendix 1), though localized parts of the state saw rainfall totals that were as much as 3.00” below normal to 8.00” above normal (Figure 1). April 2017 was the second driest in the 126-year long record for Orlando, with only a trace amount of rainfall recorded. A few 24-hour precipitation records broken for the month (Table 3).

Figure 1: A graphical depiction of the monthly rainfall departure from normal (inches) for April is given in the figure below (courtesy of NOAA, NWS) 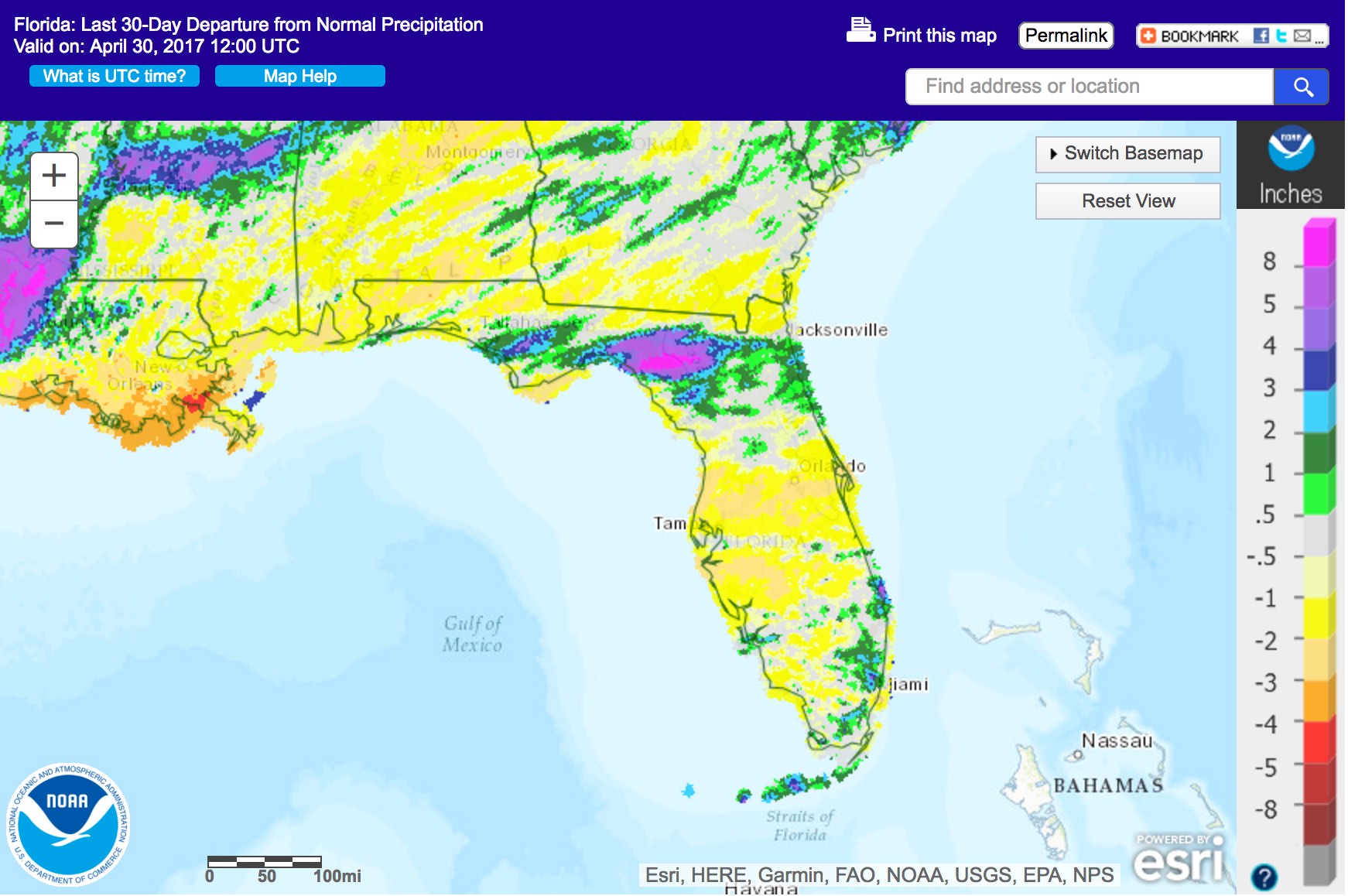 Based on current data and forecast models, the Climate Prediction Center (CPC) ENSO Alert System Status is set to “Not Active”. ENSO-neutral conditions are currently present, with sea surface temperatures (SST) near-average across the central Pacific, and above-average in the eastern Pacific Ocean. ENSO-neutral conditions are favored at least through the end of spring, with increasing probability of El Niño developing by late summer and fall 2017.  The CPC seasonal outlook favors above-normal temperatures and near-normal precipitation through July 2017.

There were a total of 170 hazardous weather reports issued by the National Weather Service in Florida for April 2017 (See Table 4).

With the warming temperatures swimmers are increasingly venturing into surf waters and encounters with rip currents become more frequent. Five separate rip current incidents were reported in April along the state’s Atlantic Coast, between Miami Beach and New Smyrna Beach. Three of these incidents involved fatalities, and a dozen victims were successfully rescued.

The overall dry and hot weather of the past few months has set the stage for significant fire danger across the state. There were 21 separate fire reports logged by the National Weather Service during the month. Fires in Broward, Clay, Collier, Duval, Hernando, Lake, Osceola, Marion, and Seminole Counties required road closures and evacuations, and in some cases buildings, structures, and vehicles were damaged or destroyed. Major wildfires are currently burning in Alachua, Baker, Bradford, Clay, Collier, Hernando, Highlands, Lake, Nassau, Orange, Osceola, Pasco, Polk, Putnam, Seminole and Volusia Counties. As of April 30th, Florida has a total of 28 active wildfires that are over 100 acres in size, affecting a total area of about 146,000 acres.

The overwhelming majority (over 80%) of the remaining reports were the result of two frontal systems passing over the state in quick succession between the 3rd and 6th if the month. High winds were reported from Pensacola to Panama City, from Cedar Key to Fort Myers, and from Jacksonville to Melbourne. Associated storm damage was reported across the panhandle and the I75-corridor to Ocala, and along the Atlantic coast between Jacksonville and Daytona Beach. These systems brought heavy rains and flooding in Baker, Bayr, Clay, Flagler, Lafayette, St. Johns, Suwannee and Taylor Counties, with localized rainfall amounts up to 10-12 inches (estimated by radar), and over a foot of water along some local roads. Consequences from these rains included a sinkhole measuring 50 by 75 feet on Hwy 51 in Lafayette County. The storms brought hail of up to 1.25 inches to Gadsden, Gulf, Duval, Hamilton, Leon, Marion, Okaloosa, Polk, Seminole, and St. Johns Counties. Two waterspouts were spotted offshore from Pensacola Beach on the 3rd, and an EF0 tornado, which destroyed several structures, was recorded in Fort Myers on the 6th.

On the 23rd of the month, a strong trough brought large amounts of rain to the Atlantic Coast, from Port St. Lucie to Miami, with localized measurements of 6 or more inches of rain over a 12-hour period. These rains contributed to lifting of the abnormal drought fin the southeast portion of the state.

Table 4: Breakdown of storm reports submitted in Florida during the month of April (Compiled from Southeast Regional Climate Center.) 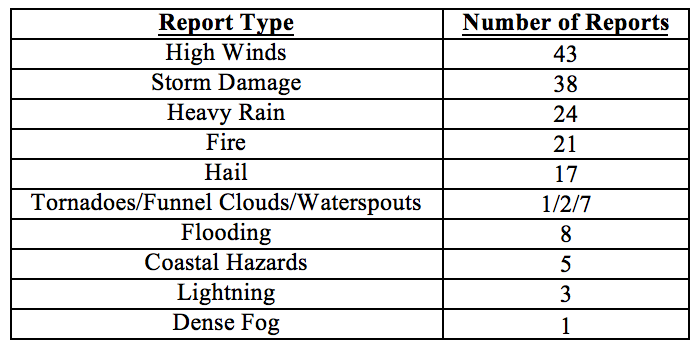 At the end of March, less than 9% of the state was drought-free, approximately 40% was abnormally dry (D0), another 40% was experiencing moderate drought (D1), and slightly over 11% was experiencing severe drought (D2). D1 or worse conditions are present over most of peninsular Florida, with D2 conditions affecting most of Desoto, Highlands, Okeechobee, Glades, Lee, and Hendry Counties, as well as parts of Sarasota, Collier, Levy and Alachua Counties. By the first week of April, abnormally dry conditions in the panhandle were eliminated or significantly reduced, but later in the month crept back in, particularly in the northern parts of counties along the Georgia border.  The area of severe drought (D2) in south central Florida gradually expanded in all directions, extending, by the end of the month, from Collier County in the South to Hernando, Sumter, Lake, Orange, and Brevard Counties in the North. D2 conditions were also affecting large portions of Nassau County. Heavy rains on the 23rd of the month cleared the D0 conditions from large portions of Palm Beach, Broward, and Miami-Dade counties. As of the latest U.S. Drought Monitor report, issued on April 25, about 23.5% of the state is drought-free, 19% is under D0, 24% under D1, and 33.5% under D2 conditions. In all, about drought conditions are currently affecting an estimated 11 million Florida residents.  Burn bans are currently in effect in thirty Florida counties, including Alachua, Baker, Bradford, Brevard, Charlotte, Citrus, Collier, Glades, Hendry, Hernando, Highlands, Hillsborough, Indian River, Lake, Levy, Manatee, Marion, Nassau Counties, Okeechobee, Orange, Osceola, Palm Beach, Pasco, Polk, Putnam, Sarasota, Seminole, St. Lucie, Union, and Volusia.

At the end of the month, Lake Okeechobee water levels were at 11.61 ft., which is about two feet below average for this time of the year. 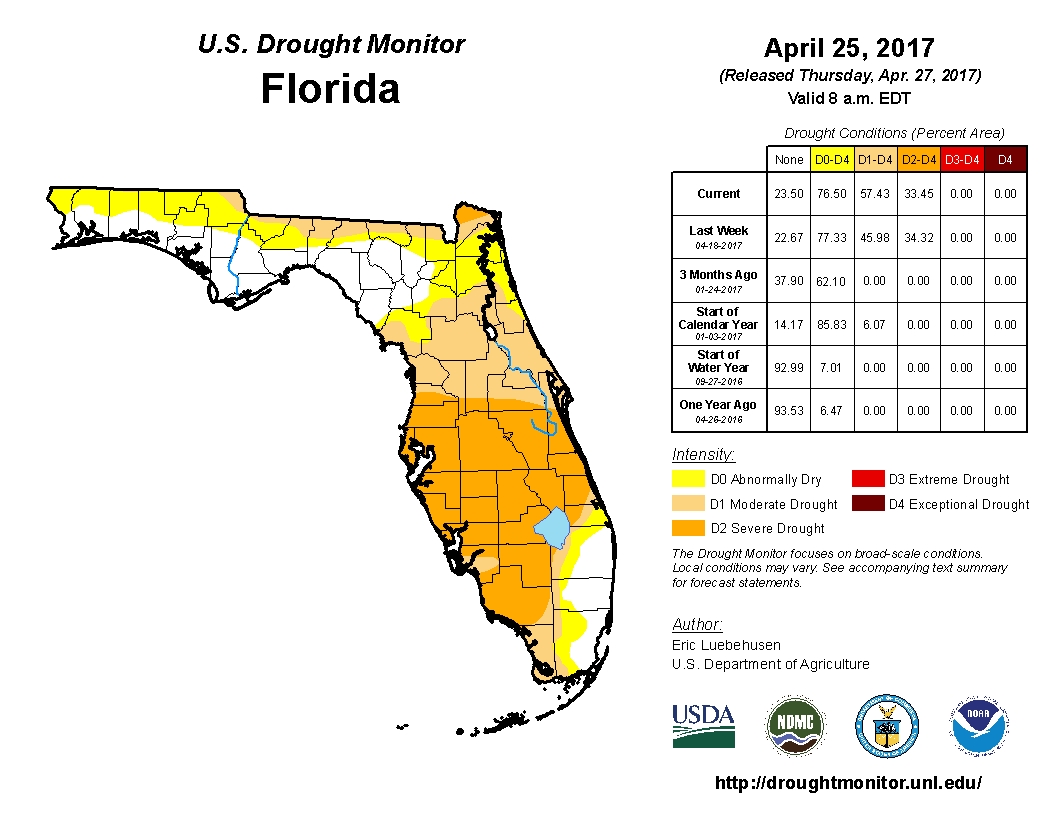 At the beginning of April, topsoil moisture levels across the state were mostly (43%) short, with another 25% at very short, 28% at adequate, and 4% at surplus levels.  The citrus growing area has been experiencing above-normal temperatures and below-normal rainfall. Drought conditions have been worsening such that the entire region, with minor exceptions, is in severe drought. Ditches and canals in most areas are dry.  Pasture and range conditions are mostly poor to fair and declining with the dry conditions, but cattle are holding at mostly fair to good condition with supplemental feeding. In many parts of the states farmers are shipping in hay and water, and digging new wells where current ones have dried out.  Field activities picked up after the frost in March, with corn planting in Escambia, Flagler, Hamilton, Jackson, Lafayette, Putnam, Suwannee, and Walton counties. Peanut planting was underway in Gilchrist and Washington Counties, and started but temporarily delayed due to dry conditions in Dixie and Levy Counties. Potato harvesting was reported in Flagler, Putnam, and St. Johns. Sugarcane harvesting is mostly finished in Broward, Glades, Hendry, and Palm Beach Counties, with some delays in completion due to drought conditions and fire hazard.  A number of vegetable crops are suffering from whiteflies whose population numbers have exploded as a result of the hot, dry conditions and the unseasonably warm winter. Some watermelon and cantaloupe plantings in Jefferson counties were damaged by hail and required replanting.  A wide variety of fruit and vegetable crops is being harvested and coming to market, including watermelon, blueberries, strawberries, broccoli, carrots, cauliflower, greens, and onions. 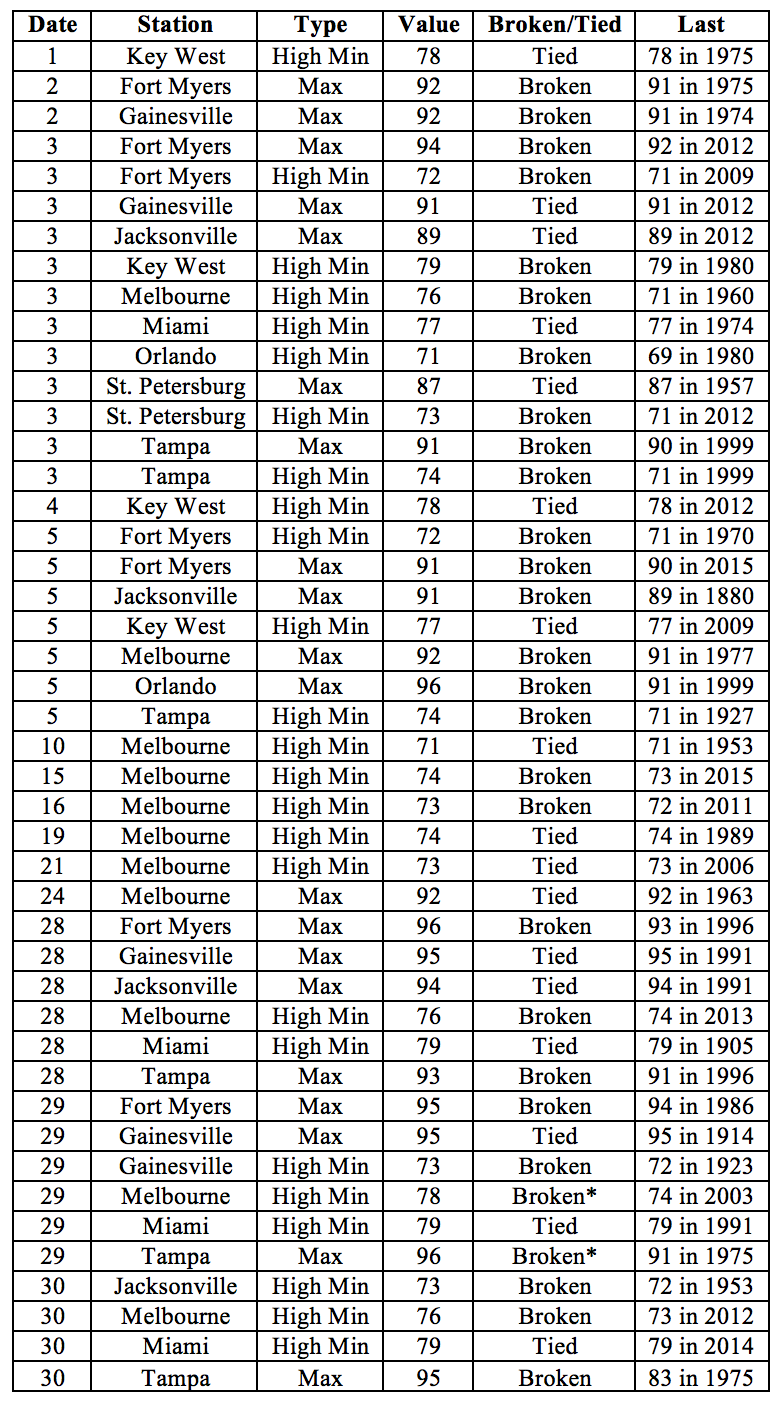