Rainfall totals in April were varied across the state. Rainfall totals were above normal for the month across the Panhandle, and below normal for the rest of the state (Figure 1). Major reporting stations registered departures from normal ranging from -2.16” in Fort Lauderdale to +6.49” in Tallahassee (Table 2 and Appendix 1), although localized parts of the state saw rainfall totals that were as much as 4” below normal to 8” above normal (Figure 1). April 2016 was the 6th driest on record for Fort Lauderdale. There were very few 24-hour precipitation records broken for the month (Table 3). 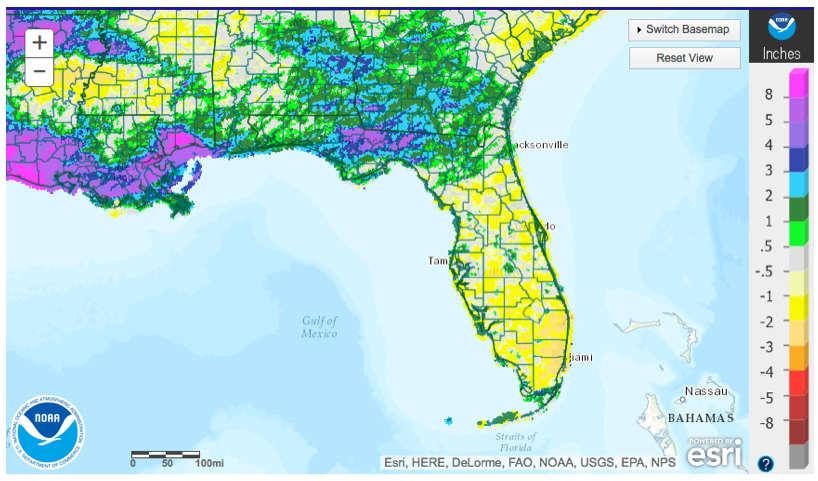 El Niño Conditions in the Pacific are present and weakening.

Based on current data and forecast models, the Climate Prediction Center (CPC) has the ENSO Alert System at an El Niño Watch. Positive equatorial sea surface temperatures (SST) anomalies continue across most of the Pacific Ocean. A transition to ENSO-neutral conditions is likely during the late spring or early summer 2016, with an increasing chance of La Nina during the second half of the year. CPC predicts an increased likelihood of above-normal precipitation and above-normal temperatures for Florida for the May-July period of 2016.

There were a total of 76 hazardous weather reports filed in April. The majority of these were for high winds and hail (see Table 4 for a full breakdown). A frontal passage on April 2nd brought high winds, with gusts up to 50-60 mph reported in Brevard, Duval, Flagler, Hillsborough, Pinellas, and Volusia Counties. Isolated flooding on that date was reported in Tallahassee, and minor storm damage was reported in Daytona Beach. In the morning of April 7th, what was likely a tornado downed powerlines and trees in Clearwater and New Port Richey, leaving thousands of customers without power. A frontline stalled over central Florida between the 14th and 15th and spawned numerous hail-producing thunderstorms. Hailstones up to 2” were reported by observers in Palm Beach and Polk County, and up to 1.5” in Martin County. Hail reports also came in from Indian River and Sumter Counties. A large wildfire of unknown origin spread across nearly 4000 acres in the Everglades spread between April 10th and 16th. Thanks to prior prescribed burning in the area, the spread was limited on most sides, and ground and aerial crews were eventually able to contain the fire and avert damage to structures. Unfortunately, hazardous weather in April was responsible for two fatalities in the state: one the result of a lightning strike near Palm Beach on April 15th, and the other the result of strong rip currents off of Jacksonville Beach on April 16th.

Table 4: Breakdown of storm reports submitted in Florida during the month of April (Compiled from Southeast Regional Climate Center.)

At the beginning of the month, most (76%) soil ratings fell into the category of “adequate”, with additional 10% of ratings falling into the “short” and 13% into the “surplus” category. The overall lack of rain towards the second half of the month, combined with warmer temperatures, has reduced soil moisture values. By the end of April, only 56% of soil moisture values were classified as adequate, and the percentage of short values increased to 32%.
Throughout the month, planting of corn, cotton and peanuts was underway in the Panhandle Counties, with occasional interruptions due to wet conditions. Pasture and cattle conditions in Charlotte, Collier, Glades, Hendry, and Highlands Counties remain in mostly good condition thanks to warmer and dryer weather. The citrus-growing area remains largely drought free, but most groves have required irrigation several times a week. The citrus tree bloom is over and small pea- to marble-size fruit for next season crop has started developing. The weather has been mostly favorable for fruit and vegetable planting, as well as harvesting.

At the end of March, about 20 percent of the state - including Alachua, Baker, Bradford, Clay, Columbia, Dixie, Duval, Flagler, Gilchrist, Hamilton, Lafayette, Levi, Madison, Marion, Nassau, Putnam, St Johns, Suwannee, Taylor, and Union counties - was affected by abnormally dry conditions. Early in April, Flagler and Volusia counties were also briefly added to the list. Beneficial rains in the first two weeks of the month helped most of the affected counties, leaving only Levi, Marion, Alachua, Putnam, Clay, and St. Jones in conditions of abnormal drought by the end of the month. As of the most recent US Drought Monitor report, issued on April 26, 93.4% of the state is drought-free. The water level at lake Okeechobee at the end of the month was at 14.2’, which is above the average for this time of the year. 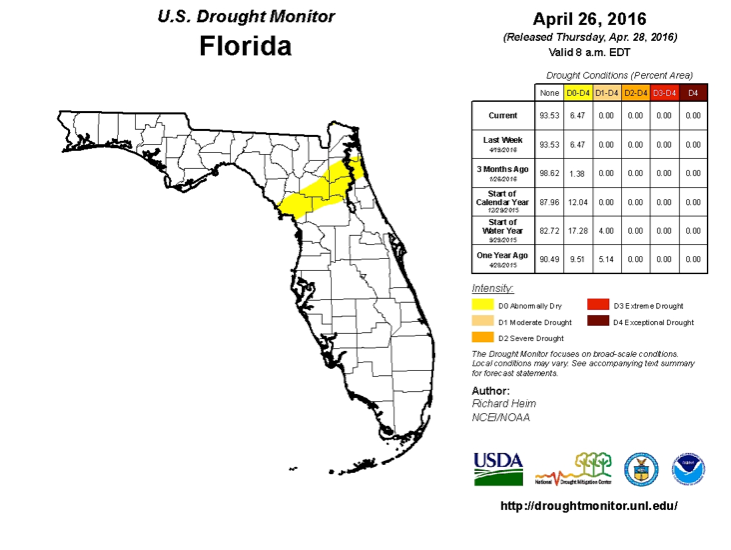