Rainfall totals were above normal across the state in April. With the exception of some areas along the West Coast, the entire state had rainfall totals above normal (Figure 1). Departures from normal roughly ranged from -0.45” to 5.66” (Table 2 and Appendix 1), though localized parts of the state saw rainfall totals that were as much as 2.00” below normal to 8.00” above normal (Figure 1). April 2015 was the 5th wettest on record at Key West, the 7th wettest in Orlando, and the 10th wettest for both Pensacola and Vero Beach. There were multiple 24-hour precipitation records broken for the month (Table 3). 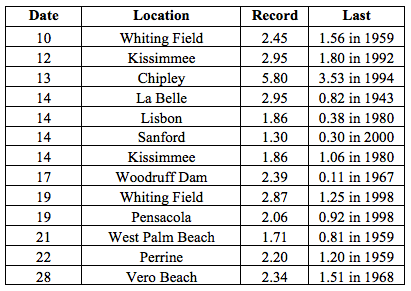 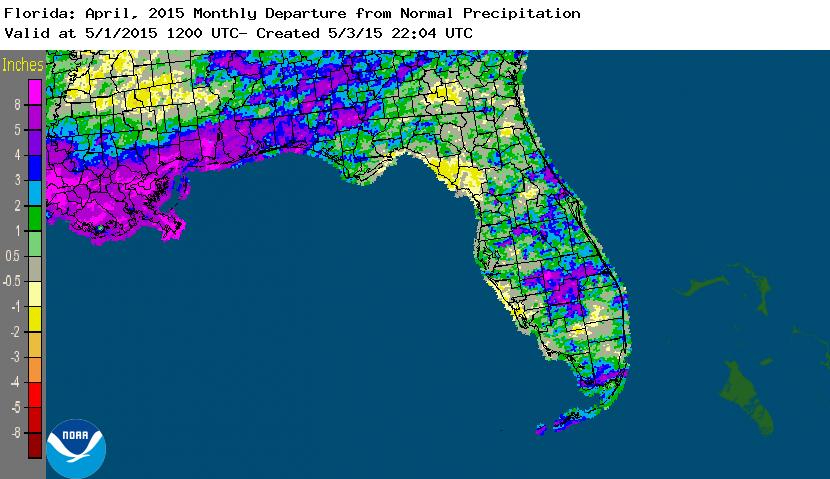 ENSO-neutral conditions continue in the Pacific.Based on current data and forecast models, the Climate Prediction Center (CPC) decided to continue the El Niño Advisory. Positive sea surface temperatures (SST) anomalies have been recorded across most of the Pacific Ocean. There is approximately a 70% chance that El Niño conditions will continue through the Summer 2015 and these conditions could persist into the fall. CPC predicts above normal temperatures and precipitation across the state through July 2015.

Hazardous weather events in April. There were a total of 265 severe weather reports made in Florida during April. On the 11th, a series of thunderstorms produced 45 mph wind gusts and heavy rain in and around the Orlando and Titusvillle areas. Heavy rain on the 12th caused problems in portions of the Panhandle. Reports of flooded roadways came in from Alford, Chipley, Cottondale, and Marianna. When the event ended in the early morning hours of the 13th, some locations in Jackson and Washington counties had received over 10.00” of rainfall. Later in the afternoon of the 13th, thunderstorms produced heavy rain and high winds, causing storm damage in Bunnell and Lake City, FL. In Macclenny, FL (Baker County), two people were injured due to a lightning strike; the same lightning strike started a structural fire. Lightning caused another structural fire on the 14th in Gulf Breeze, FL. On the 17th, multiple reports were made of waterspouts off the coast near Pompano Beach. A strong line of thunderstorms moved through the Panhandle on the 19th, causing storm damage, heavy rain, high winds and even a couple of tornadoes over the duration of the event. A short-lived EF-0 tornado moved through a rural area near Bruce, FL (Walton County); damage was confined to trees and a few power lines. The National Weather Service confirmed two EF-1 tornadoes, with wind speeds of 105 mph, near Ellaville, FL (Jackson County) and Tallahassee, FL after the survey of tree and structural damage was completed. As the line of storms continued to push across the Panhandle, storm damage reports came in from North Florida (Perry, Lake City, Gainesville, and Jacksonville) and Central Florida (Tampa, Orlando, Titusville, Cocoa Beach), where high winds (up to 60 mph) were recorded. On the morning of the 20th, over forty reports of storm damage (power outages and downed trees) were received from around the Tallahassee area as a line of storms moved through the city. As the line of thunderstorms pushed through the rest of the state, reports of hail (1.50” in diameter), storm damage and high winds (up to 60 mph) were reported in Bartow, Branford, Jacksonville, Jensen Beach, and Miami. Funnel clouds were seen over Boynton Beach and Miami Springs, and an EF-1 (winds 70-90 mph) tornado was confirmed southwest of Ocala. There were multiple reports of a waterspout that spawned over Lake Okeechobee and came ashore near Belle Glade, FL on the 23rd. April 25th was another active severe weather day across the northern part of state, as reports of hail, storm damage, heavy rain and strong winds were received from the Panhandle. An EF-1 tornado was confirmed in Arlington, FL (Duval County) with maximum winds speeds over 100 mph that caused damage to power lines and structures. Severe thunderstorms pushed through the southern Peninsula produced hail in locations on the north shore of Lake Okeechobee, along with areas around Stuart and Miami. At the end of the month, many reports of high winds were received from locations along the Keys.

Drought Related impacts. At the end of March, nearly 24% of the state was experiencing abnormally dry (D0) conditions, with the main concentration of the dryness located in the western Panhandle and southern Florida. The lack of rainfall at the beginning of April led to the expansion of dry conditions (D0) into more of the Panhandle and Big Bend (Gadsden, Leon and Liberty counties), as well as South Florida (Collier, Glades, Hendry, Martin and Palm Beach counties). By the April 14th release of the Drought Monitor, localized heavy rains had eased dry conditions in the Panhandle with the removal of all moderate drought (D1) conditions, and even some D0 in Jackson, Walton and Washington counties. Around mid-month, additional rainfall in the Panhandle caused the complete removal of the remaining D0 conditions. However, the lack of rain in the southern part of the state caused the further expansion of D1 throughout the Everglades drainage basin. The area of severe drought (D2) conditions increased in size from roughly 1% of the state to 5%, to cover Collier, Dade, and Monroe counties. Based on data from the Drought Monitor, roughly 4.5 million Florida citizens are currently being impacted by drought conditions that are being reported in nearly 10% of the state. At the end of the month, the water level in Lake Okeechobee had dropped to under 14 ft., mainly due to regulatory releases. 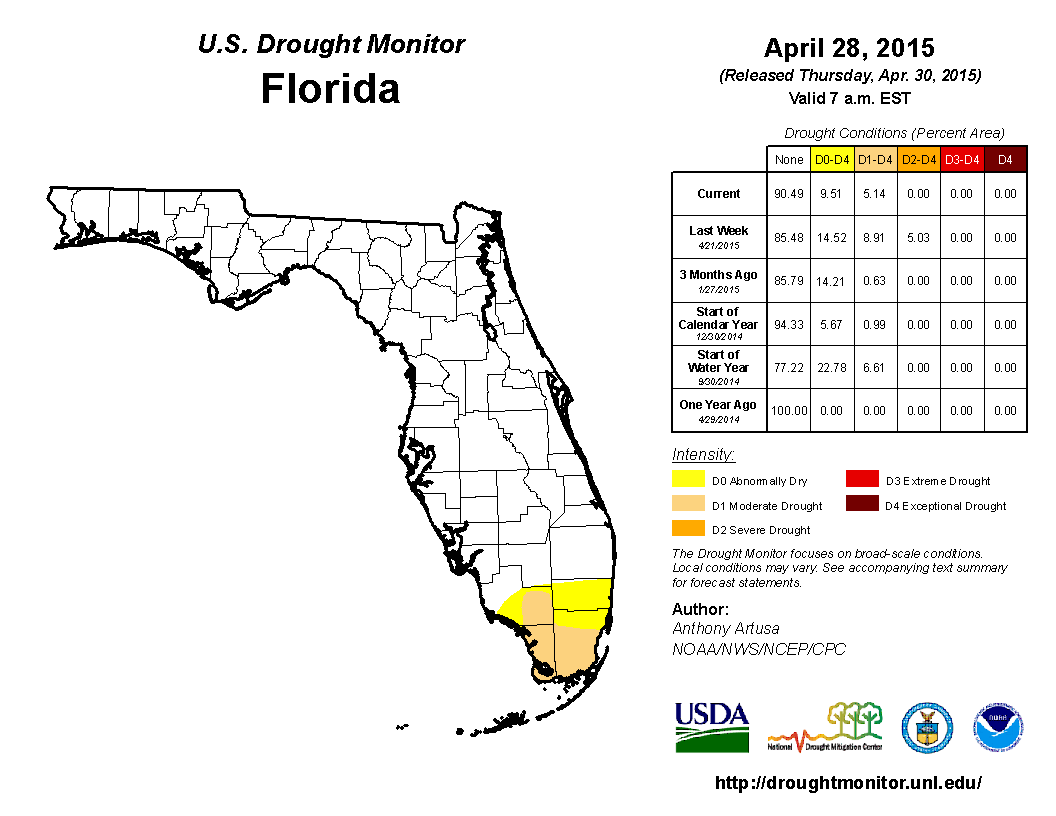 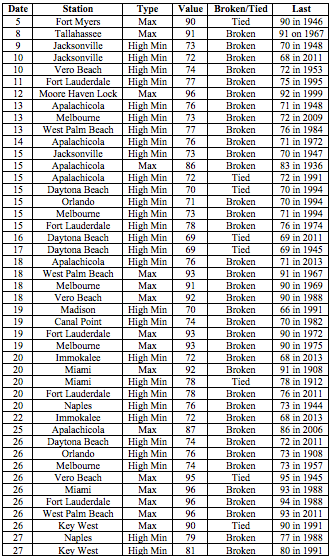