Average temperatures above normal across the state in April. Average temperatures were above normal for April across the entire state (Table 1 and Appendix 1). Departures ranged from +0.7˚F in Jacksonville to +3.6˚F in St. Petersburg. April 2013 was the 7th warmest April in Miami and Tampa. Even though the average temperatures show April as being a warm month, there were some strong cold fronts that moved through the area, and patchy late season frosts were seen in some of the agricultural growing regions of the state. Numerous maximum and high minimum temperature records were broken and tied during the month (Appendix 2), along with a few low maximum temperatures that were broken toward the end of April.

Rainfall totals varied across the state in April. Rainfall totals across the state varied in April (Table 2), though most of the state reported totals that were below normal. Localized portions of the northeast Florida, along the Florida/Georgia state line in Columbia, Hamilton, and Madison counties, recorded above normal rainfall (1 to 5 inches), while locations along the Nature and Sun coasts reported rainfall totals 1 to 2 inches below normal precipitation (Figure 1). There were a few precipitation records broken during April (Table 3), and portions of south Florida saw heavy rainfall and flooding in some of the metropolitan areas during the month. Most of the counties south of Lake Ockeechobee had normal to above normal rainfall, and the lake itself has a level of 13.40 feet, which is down from the high of 16 feet due to some regulatory releases. The 3-month outlooks are forecasting normal rainfall through July, but there is still concern about the lingering drought in the central part of the peninsula. 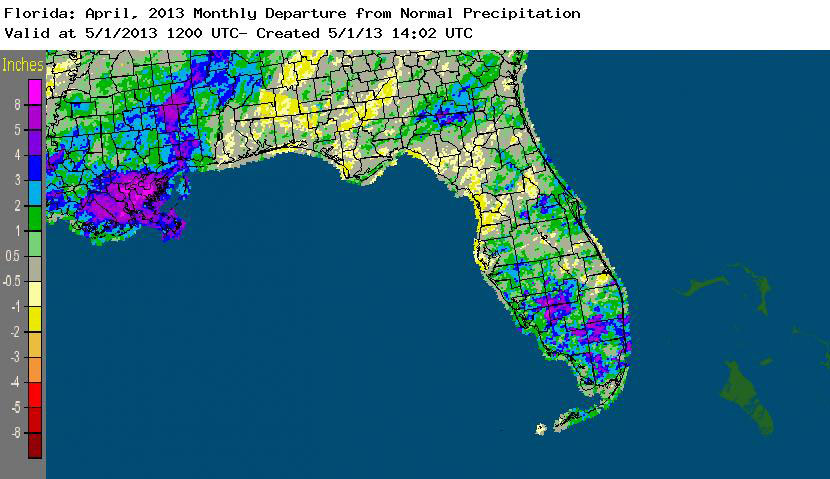 ENSO-neutral conditions continue in the Pacific. As of April 1st, neutral ENSO conditions continue to be reported for the equatorial Pacific. Equatorial sea surface temperatures (SST) are near average across much of the Pacific Ocean. ENSO-neutral conditions are favored to continue through the summer 2013. The Climate Prediction Center (CPC) predicts above normal temperatures for the state and they are also predicting normal precipitation for Florida through July.

Hazardous weather events in April. April was a fairly active month for severe weather, with 214 storm reports made during the 30-day period. The month started off with six swimmers rescued from strong rip currents near Miramar Beach, FL, a thunderstorm that produced pea to nickel sized hail in the Miami metro area, and wildfire (~1000 acres burned) that was started by lightning near Kennedy Space Center all on April 1st. A low-pressure system in the Gulf of Mexico pushed through the state on April 3rd - 5th, bringing multiple rounds of severe weather associated with both a warm and cold front. Non-thunderstorm related wind gusts over 50 mph were reported along the Florida Panhandle and offshore on the 3rd, while reports of storm damage, hail, high winds were reported along the peninsula during the 4th and 5th. An EF0 tornado was confirmed to have touched down on the south end of Big Pine Key on the 5th. A wildfire that burned more than 400 acres started near Juniper Springs on the 7th. Another strong cold front pushed through the state April 11th – 13th, caused high winds (60 mph gust in Milton, FL) and storm damage in the Panhandle, and heavy rains and flooding to portions of Miami-Dade County. Lightning is believed to be the cause of a house fire in Normandy, FL on the 14th. On the same day, a low-pressure formed in the northern Gulf of Mexico and a warm front lifted across the northern part of the state- and spawned a waterspout that moved on shore and did damage to some homes in Eastpoint, FL. Numerous reports of hail were made in and around the Orlando area, ranging from pea to quarter-sized hail during an hour period on the 14th. Thunderstorm wind gusts of at least 40 mph were record at a variety of stations in the Tampa/St. Petersburg area. In addition, reports of heavy rain, flooding, hail, storm damage and high winds were also made on the 15th from many south Florida locations. A 1600-acre wildfire was reported by the U.S. Forrest Service in Playalinda Beach, FL on the afternoon of the 18th. The 19th and 20th of the month had more reports of high winds in the interior and along the eastern peninsula coast, along with reports of waterspouts and funnel clouds seen in portions of the Lower Keys. At the end of the month, severe thunderstorms produced high winds, hail and storm damage in the over night and early morning hours of the 29th in Ocala, Orlando, Daytona Beach, and Jacksonville. On the 30th, more hail, storm damage and heavy rain were reported around Orlando, while waterspouts and a tornado, along with flooding and hail were seen in areas of the Gold Coast from West Palm Beach to Miami.

Table 4: Breakdown of storm reports submitted in Florida during the month of April (compiled from Southeast Regional Climate Center).

Agricultural and other climate-related impacts. At the beginning of April, corn and peanuts were being planted and some spring hay harvesting had also been reported. The harvesting of sugarcane was nearing completion. North Florida farmers also began planting cantaloupe, watermelons and tomatoes. Warm seasons crops in south Florida had a setback from a late season frost and high winds. Drought continued to limit forage growth, and the lingering cold temperatures from March has slowed growth, while flooding and disease compounded the problem. Bad weather caused farmers to replant corn and watermelons in some locations. Planting of sweet corn and peas in the Panhandle started in mid-April, as cabbage, watermelons and blueberries were harvested in central and south Florida. Statewide, most of the cattle stock was in fair to good condition, though poor forage in some locations forced ranchers to hay feed their herd. After more bad weather in portions of the Panhandle, certain crops had to be replanted. Spring vegetables were being planted in central Florida, but south Florida growers were battling disease due to heavy rain.

While the statewide rainfall totals varied greatly across the state during April, there have been some improvements. The Florida Panhandle remained drought free through April, though at the beginning of the month, portions of south Florida degraded from dry conditions to moderate drought, before rains set in and helped eased the dryness. Unfortunately, the dryness of April continued in the central Peninsula, and the region of severe drought spread from Flagler and Putnam counties, westward into Marion, Citrus and Levy counties. The beneficial rains at the end of the month helped pull south Florida out of moderate drought, helped either ease the drought in some locations and remove it from others. 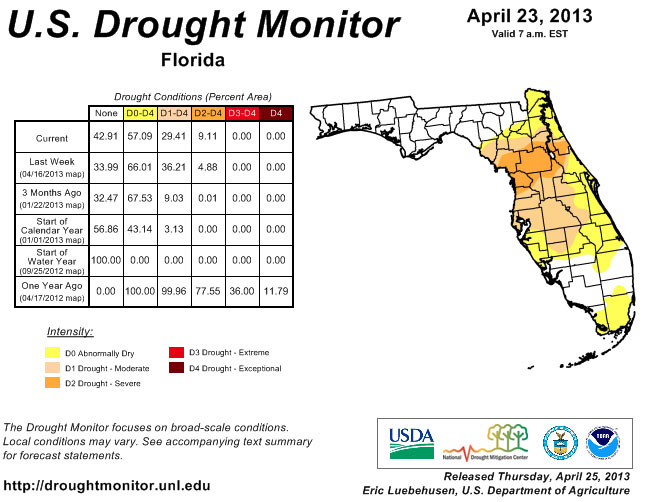