Rainfall totals varied statewide in April. Rainfall totals varied statewide in April (Table 2). Most stations saw below normal rainfall, while Key West, Miami, and Tampa saw above normal rainfall totals for the month. April 2012 was the 7th wettest on record at Miami and the 6th wettest April from the 142-year-long record at Key West. It was also the 4th wettest April on record at Fort Lauderdale (Appendix 1). Heavy rains mainly impacted southeast portions of the state during two separate rain events, and some rainfall records were broken toward the end of the month (Table 3). A Community Collaborative Rain, Hail and Snow (CoCoRaHS) observer reported a total rainfall of 14.46” for the month of April in the Florida Keys, while another observer in Broward County reported a monthly total of 14.33”. Areal patterns of monthly rainfall relative to normal are depicted in Figure 1. 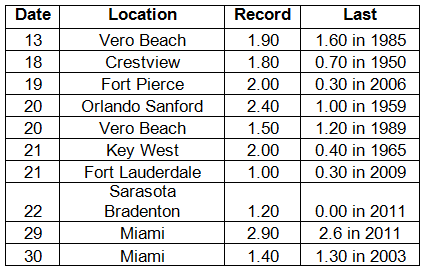 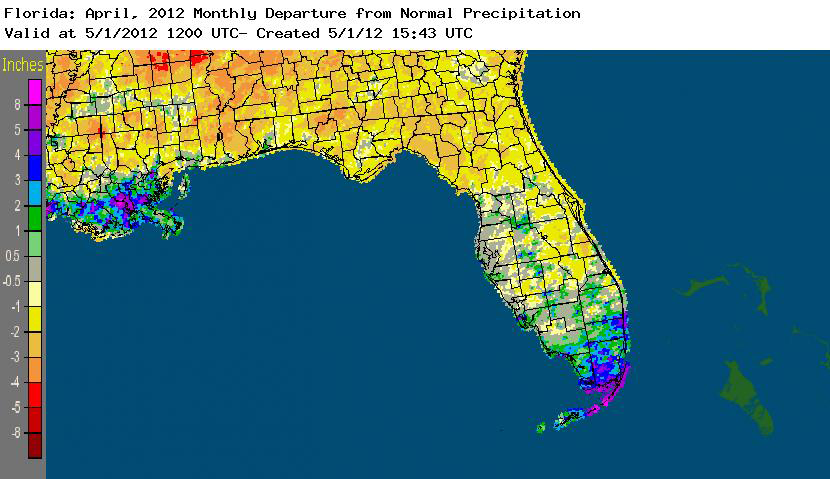 Transition from La Niña to Neutral conditions to continue in Pacific. A transition from La Niña to Neutral ENSO conditions continues across the equatorial Pacific. Equatorial sea surface temperatures (SST) were slightly below average in the central Pacific, but are above average in the east-central and eastern Pacific Ocean. The atmospheric circulation anomalies and winds are still consistent with La Niña, though they have weakened in recent weeks. La Niña is expected to transition to neutral conditions sometime in May 2012. The Climate Prediction Center (CPC) continues to predict warmer than normal temperatures and is now predicting normal precipitation through July. There is a chance that the equatorial Pacific will warm enough that an El Niño could set up by the winter of 2012.

Hazardous weather events in April. A severe thunderstorm on the 3rd impacted the Tallahassee area, resulting in high winds, heavy rain, and hail. Numerous reports of downed trees were made throughout the town and one of the incidents of a downed tree led to an injury that later became fatal. The 4th-6th of the month saw reports of high winds from a non-thunderstorm event from St Petersburg-Tampa to the Florida Keys. On the 6th, there was a waterspout that moved onshore near Naples and did minor damage (small trees down and downed pour lines). The tornado was rated as EF0, and was accompanied by 1” hail. From April 7th-11th, wildfire reports came from the area near Fargo and Lake City, FL, and by April 19th, the wildfire had burned almost 35,000 acres. Pea-sized to nickel-sized hail was reported across central Florida as a severe thunderstorm made its way across the peninsula on the 20th, along with high winds and damage reports. Twin waterspouts were reported a couple hundred yards off St. George Island State Park on the 21st; hail and downed trees were reported inland from the park. Lightning started a house fire in Tallahassee on the 21st. On the 22nd, about 35 high wind reports came in from all portions of the state, and, on the 30th, roughly 30 reports of high winds were reported.

Agricultural and other climate-related impacts. Topsoil and subsoil moisture have continued to be problems for growers across the state as the drought conditions to worsen. Hot, dry winds mid-month dried out soils and limited forage growth in pastures. The use of irrigation has increased amongst vegetable growers, and pastures have suffered from the dry conditions. Stock pond water is at critical levels in the northern and central parts of the state.

Since the release of the March 27 Drought Monitor, conditions have worsened across most of the state. As of April 24, nearly 12% of the state is listed as being in exceptional drought, the highest designation of the drought monitor. This area of exceptional drought extends from portions of the Nature Coast to the First Coast, impacting locations such as, Lake City, Gainesville, and Jacksonville. Parts of the Suwannee River are at some of the lowest flows seen on record. The areas of moderate and extreme drought grew as rainfall was below normal in central Florida and parts of the Big Bend. The only part of the state that saw any improvement in conditions was south Florida, where portions of the area saw almost double the normal monthly rainfall for April. 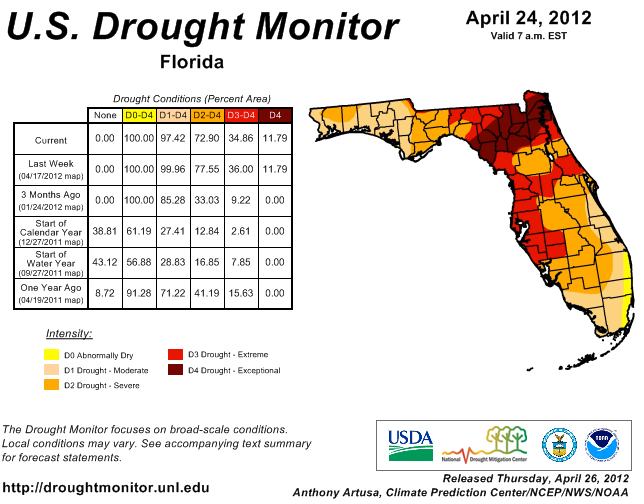 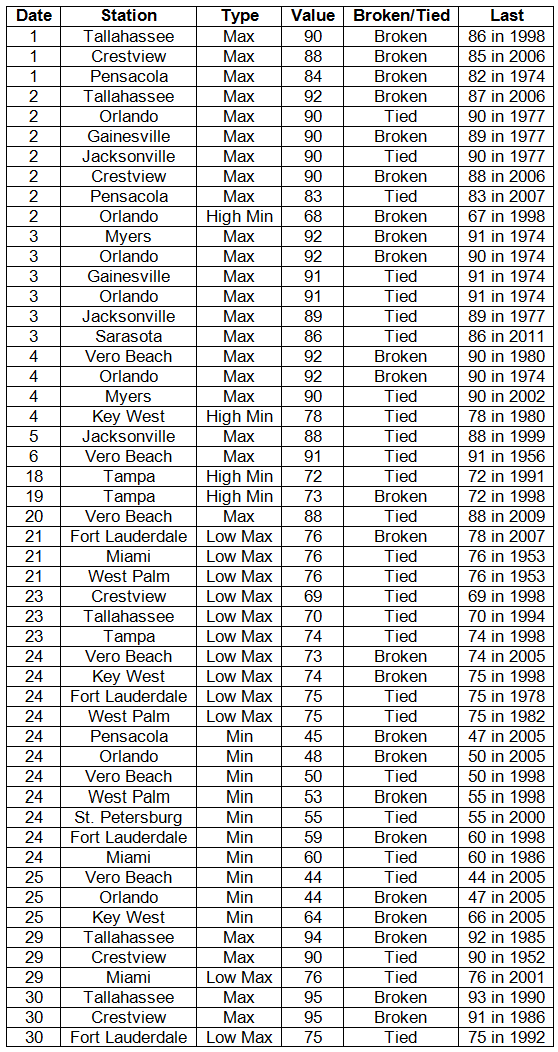