April rainfall above normal in central and southern areas and below normal in northern area. Rainfall totals for April well above normal at most central and southern stations, while totals were below normal across northern Florida and at Key West (Table 2). Several daily rainfall records were broken during the month (Table 3). Of note, the daily rainfall (2.15 in) at Miami on the 12th broke a record in existence since 1900.

Figure 1. A graphical depiction of the monthly rainfall departure from normal (inches) for April is given in the figure below (courtesy of NOAA, NWS). Bands of well-above normal monthly rainfall are indicated in northern, central, and south-central parts of the state. 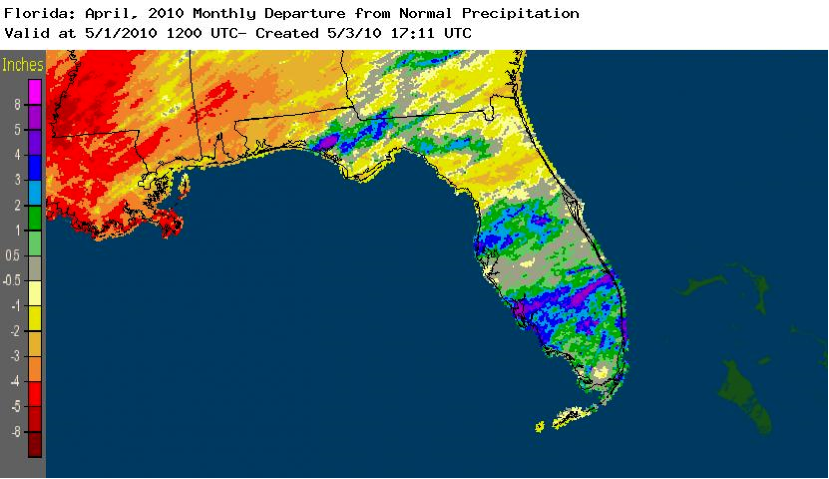 Hazardous weather. The 25th was an active severe weather day as a prefrontal squall line moved across northeastern and north-central parts of the state. There were numerous observations of one-inch diameter hail. Hail the size of golf balls (1.75 inches) was reported near Silver Springs. High winds caused structural damage and downed power lines and trees. As this squall line moved off the southeastern coast on the 26th, winds up to 60 mph were observed from south of Miami to near Key Largo. Along the southeastern coast, a wind gust of 77 mph was observed at Fowey Rocks. On the 30th thunderstorm winds downed power lines and trees near Ft. White, blew the roof off a barn near Ichetucknee Springs, and blew a tree onto a house near Gainesville.

Agricultural and other impacts. On April 15, 11 counties in northwest Florida were designated as primary natural disaster areas due to crop losses caused by excessive rain in November and December 2009. Warmer and drier weather during April aided forage growth and allowed peanut, corn, and tobacco planting to begin in northern areas. However, abnormally dry conditions that developed in extreme northwestern Florida by late in the month started to stress pasture and newly-planted crops. Heavy rains in southern areas continued to ease long-term water deficits.