CONTACT: David F. Zierden, State Climatologist of Florida
(850) 644-3417; This email address is being protected from spambots. You need JavaScript enabled to view it.
October 30, 2013

Winter to be more variable in the Southeast, increased risk of damaging freezes

Weather patterns this year for the upcoming winter are prone to be more variable, with swings between warmer, colder, wetter, and drier periods throughout the season. The reason is that the Pacific Ocean is currently in the neutral phase; meaning sea surface temperatures near the equator in eastern and central Pacific Ocean are close to normal. Winter weather and climate patterns in Florida and the Southeast are heavily influenced by the El Niño/La Niña cycle, where ocean temperatures in the tropical Pacific swing between warmer than normal and colder than normal every 2 to 7 years.

El Niño refers to periods when the sea surface temperatures near the equator from the coast of South America all the way to the central Pacific turn unusually warm for a period of 6 to 12 months. The presence of this warm water tends to set jet stream patterns in place that usher frequent storms and rain to the northern Gulf Coast, Florida, and the Southeast Atlantic coast along with cooler temperatures. The opposite phase, or La Niña, describes a colder than normal sea surface in the same region of the Pacific Ocean. La Niña brings a pattern of warmer and drier winters to the Southeast, often leading to the development of drought.

With neither El Niño nor La Niña in place this year, the jet streams are freer to meander over North America, leading to greater variability in temperature and rainfall from week to week. When looking at the winter as a whole, the seasonal temperature and rainfall is likely to be close to normal. Instead of the odds being heavily tipped towards wetter and colder or drier and warmer, all possibilities are equally likely in a neutral winter.

Pacific Ocean to remain neutral through spring of 2014

Sea surface temperatures along the equator near the coast of South America cooled slightly in the summer months, yet remained well within the "normal" range. Near normal sea surface temperatures in this area of the Pacific is known as Neutral conditions. Historically, neutral conditions occur roughly half the years while El Niño and La Niña each occur about a quarter of the time. Neutral conditions have prevailed since April of 2012, including last fall, winter, and spring, giving us the first "neutral" year since 2007.

Neutral conditions are likely to continue through the remainder of 2013 and into spring of 2014. In spite of the recent cooling in the far eastern Pacific, temperatures in the central and western Pacific remain very close to normal. Deeper water temperatures along the whole equator are actually somewhat warmer than normal, lending little support any continued cooling at the surface. In addition, surface trade winds over the western and central Pacific are near normal giving little dynamic support for additional cooling. Most projections from both dynamical and statistical ocean models support the continuation of neutral conditions through the winter and spring of 2013.

Florida (and the Southeast) can expect freezing temperatures nearly every winter as far south as Lake Okeechobee. Some years, however, see severe freezes and Arctic outbreaks that devastate citrus and vegetable production in the State of Florida. These "impact" freezes occur on average every 10 to 20 years. A dozen or so of these "impact" freezes have struck since 1894, including several in the very cold decade of the 1980's. Of these harsh freezes, nearly every one has occurred during the neutral phase of the Pacific Ocean. 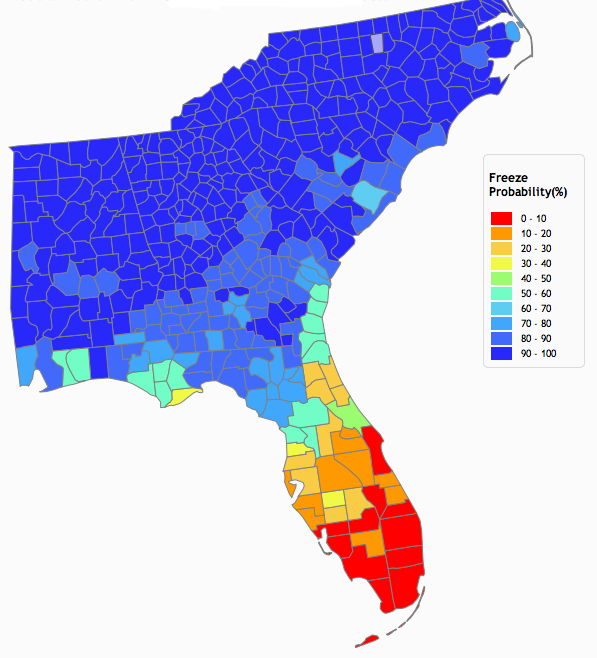 During years with El Niño or La Niña, the jet streams seem to lock into preferred positions that block the intrusions of the coldest Arctic air masses. In neutral winters, the jet streams are freer to meander and possible amplify into the dramatic dip over the eastern U.S. that can usher in the frigid Arctic air. The neutral phase does not guarantee that we will experience on of these damaging freezes this winter, just that the odds are twice as likely than in other phases of the Pacific Ocean.

The rain this summer has been frequent, widespread, and heavy at times. From South Florida to the Panhandle and Southeast Alabama and even western and central Carolinas, both the month of July and the three months of June through August rank among the wettest ever with many stations setting records. Even in the parts that have received a little less rainfall, saturated soils and standing water were a huge problem. Many locations recorded over 30 inches of rain in the three months, over half the annual average. The rainfall was not only heavy and widespread, but also frequent occurring nearly daily. In the month of July, many locations in Florida, Alabama, and Georgia recorded rainfall on 25 of the 31 days in the month.

The map above shows that the states of Florida, Georgia, and South Caroline all experienced their wettest summer since records began in 1895. The map also shows that the rainy conditions affected the entire eastern U.S, with New York also having its rainiest summer ever and many other states ranked in the top five or top ten.

Surprisingly, nearly all of this rainfall has not come from tropical depressions or storms. Tropical storm Andrea has been the only system to impact the state so far this year, brining 1-2 inches of rain over central Florida and higher amounts to north Florida and the Big Bend.

Instead, a recurring pattern of high pressure ridging over the Western U.S. and troughing or lower pressures over the central and eastern U.S. set itself up time and time again this summer. The subtropical or "Bermuda" high has been pushed further eastward over the Atlantic Ocean, allowing a very moist southerly flow of tropical humidity over the region. Add to that an unstable atmosphere and stalled frontal boundaries over the northern Gulf Coast, showers and thunderstorms have been numerous, frequent, and widespread

Fortunately, the arrival of fall brought a drying trend to the Southeast. Fall is usually one of the drier seasons in the Southeast, barring a hit from a tropical system or hurricane. Since September 1st, rainfall is running only 50% of normal over most of most of the Southeast, with the exception of the Florida west coast. 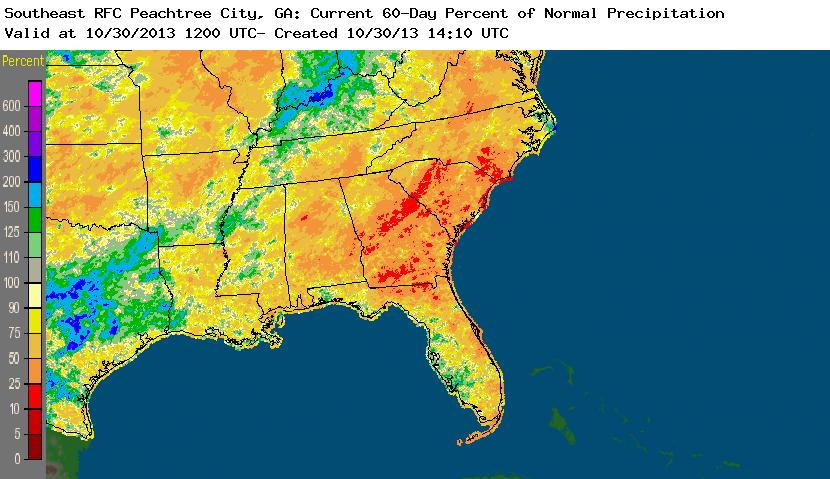 Percent of normal precipitation for the last 60 days (from Oct. 30) from radar estimates (Courtesy NWS)

This drier weather has been generally good for crops, with the plentiful sunshine and warm temperature allowing crops to reach maturity. The dry weather can also be favorable for harvest, though some peanut fields are getting too hard and dry to dig.

With the drier pattern, drought is once again starting to threaten parts of the Southeast. The latest U.S. Drought Monitor has "abnormally dry", or D0, starting to reappear over Southeast Georgia and Northeast Florida, the Georgia-South Carolina border, and Central Alabama. We anticipate normal rainfall over the interior of Georgia and Alabama this winter and spring, which should provide the needed recharge of surface and groundwater than normally happens in the winter and spring. 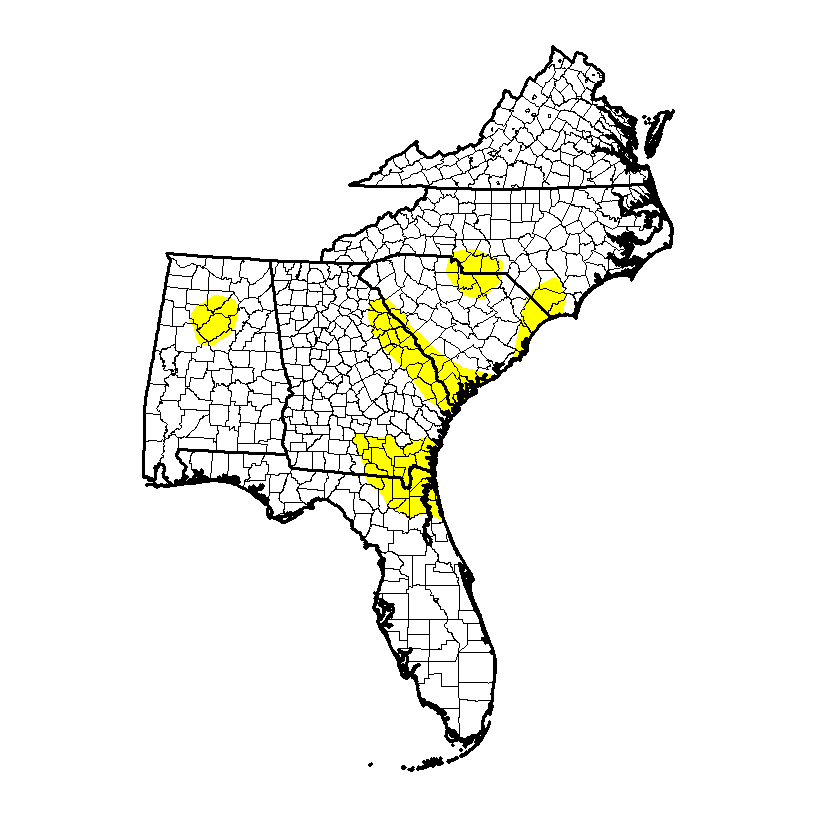